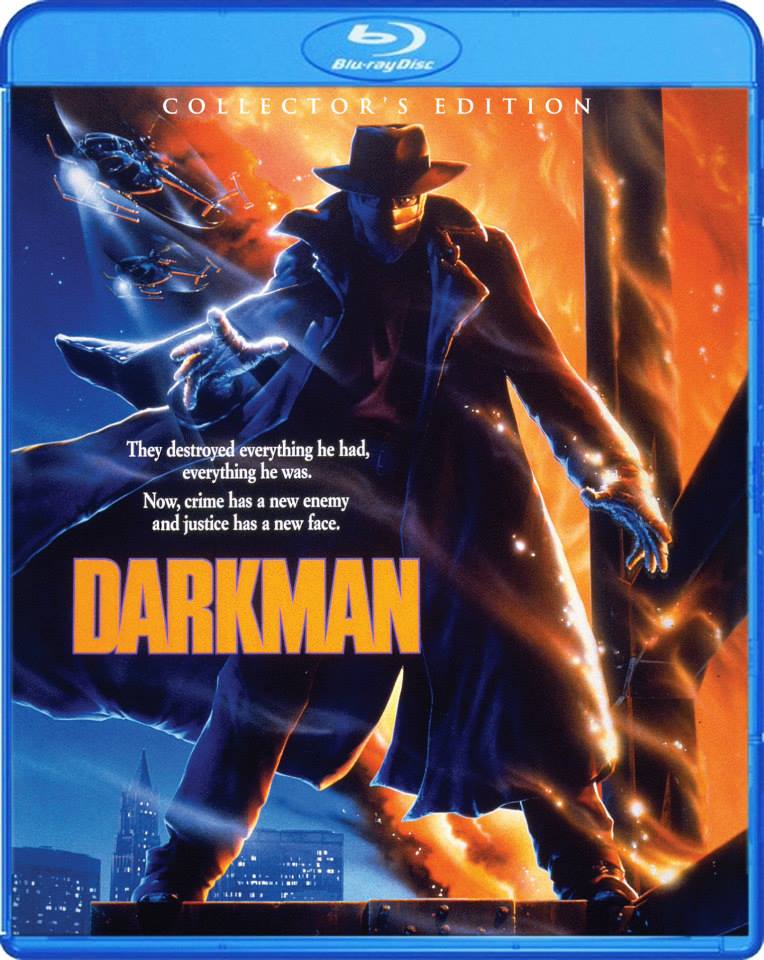 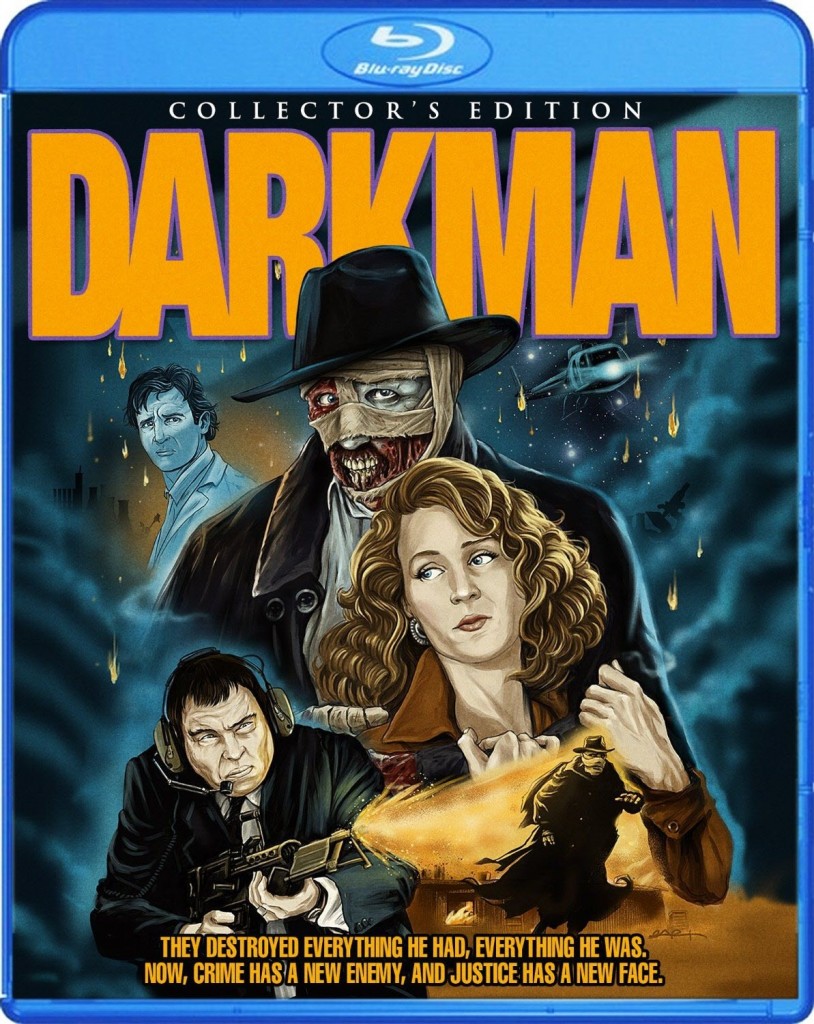 I always wonder what the reception of Darkman would have been like if it wasn’t released in the shadow of Tim Burton’s Batman. Sam Raimi’s comic book inspired film was somewhat of an odd thing when it released in 1990 and didn’t seem to pick up speed until hitting VHS and Cable. I remember reading middling reviews in the newspaper and never gave it a chance until I bought a VHS tape from a video store’s clearance rack. I’ve bought Darkman on every format (sans Laserdisc) since. Scream Factory’s gorgeous release marks the third time in twenty years I’ve plunked down my hard earned cash for this film.

Darkman is a classic revenge based “origin story.” In 2014 it’s easy to be exhausted with origin stories, but I think it still works here. What I love about Darkman is that Raimi doesn’t waste any time with the origin details. He jumps right into the creation of this tortured character played by a young and then relatively unknown Liam Neeson, then thrusts this character into a standard revenge plot. Despite this tired plot formula, Darkman works in spades still today mainly because of Raimi’s execution, a strong lead and a host of character actors. In fact, I’d say that the character actors elevate this film because of their ability to make me believe they are actually Darkman in disguise. These scenes stand out as my favorite moments.

Raimi’s visual flourishes and signatures are all over this movie and the lack of CGI is welcomed. With more “pre-CGI era” films being given the Scream Factory Treatment, I hope budding filmmakers see the importance of practical and optical effects. Everything looks top notch here in HD, from the make-up effects to some pretty great compositing.

Overall, Darkman has aged really well. It’s a comic book movie (kinda) with a hard edge and genuine meanness to it. Raimi’s direction gives us a tight 90 minute ride bolstered by fantastic effects that hold up pretty well and fun, solid performances.

It should be noted that Scream Factory did not get access to a new master, so they are using a master from Universal that has some slight, yet noticeable DNR. However, this is the best I’ve ever seen Darkman and not the train wreck like we’ve seen on movies like Predator. This won’t be on anyone’s radar as a bad transfer and I’m sure most of you won’t even notice. As it stands, Darkman still looks pretty great.

Danny Elfman’s score shines here. It’s loud, bombastic and blends well with the dialogue and sound effects. The mix is clean and sharp, with the 5.1 surround filling the room nicely. Crank this one up.

There is a wealth of information in these special features. Unfortunately, what’s missing is a new retrospective documentary. Logistically I can see why that didn’t happen. Trying to gather the filmmakers and stars for something like that would have been a chore, so I understand. What we do have are some great new interviews with stars Liam Neeson, Frances McDormand, Danny Hicks, Dan Bell as well as interviews with other key members of the production team. The Audio Commentary is hosted by Michael Felsher with DP Bill Pope. It features some great insights to the film including some the key optical effects. Rounding out the disc are over an hour’s worth of archival interviews with Sam Raimi, Liam Neeson, Frances McDormand and Colin Friels.