Exploiting the Vault: Night Train to the Alien Zone

Digging around Exploitation.TV is fun and intriguing on its own thanks to its egalitarian treatment of sub-genres ranging from horror, smut, comedy, art-house and… other. It was also fun figuring out what would pair well together among the many varied flavors of exploitation cinema, kind of like putting together a puzzle with body parts from all sorts of unusual places.

One thing I wasn’t planning on finding were anthologies. From the classics to the godawful to the mixed bags (which are most of them) I’ve always been a sucker for dirty fables lashed to a framing device before being put onto celluloid.

“The rain is a deceiver. A veil over reality.”

There’s very little alien in ALIEN ZONE. In fact, there’s none at all—nor is anything in a “zone”—beyond maybe an anthology film playing off THE TWILIGHT ZONE’s good name. It’s also known as THE HOUSE OF THE DEAD, which, while this does contain both a house and dead people, seems myopic when you factor in all the locations people die in.

Our framing device involves a philandering man lost in the rain on his way back to his hotel from a tryst with his mistress. (Don’t type “trystress.” Note to Self: scroll back up later and delete this.) A mortician brings the fella in, offers him a “tub” of coffee, and invites him on an aggressively encouraged tour of his facilities. We’re brought into a dark room of display coffins where tales of the woeful fates of their inhabitants await.

The first tale features an angry teacher who absolutely hates children. She’s so angry, in fact, that I imagined Gilda Radner playing her in an SNL sketch about a hopelessly infuriated woman who’s about to discover Qualuudes. She’s played by Judith Novgrod (who passed away in 2016), whose most notable role was probably in NIGHTWING. As she’s stalked by angry violin music around her house, the story takes a bit of a turn for THE STRANGERS if they happened to shop for Silver Shamrock products. This story, though slight, is absolutely perfect to put on the background at a Halloween party as it fully embraces the late 70’s trick or treat aesthetic. One location, mostly one actor: We’re coming right out of the gate lean and mean. 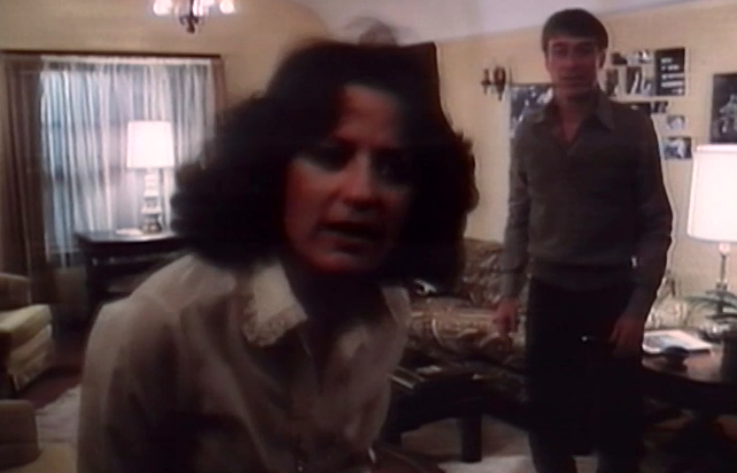 Next we meet THE INCREDIBLE MELTING MAN and A NIGHTMARE ON ELM STREET 5: THE DREAM CHILD’s Burr DeBenning as a more-than-just-creepy photographer. If you ever wondered what AUTO FOCUS would be like if it was a short student film, have I got something for you! Some genuine creepiness, unfortunately, is offset somewhat by some jarring editing in the framework. That said, the effectiveness comes from DeBenning’s off-kilter performance, some genuinely sweet and realistic performances from actresses who do a lot with barely any screen time, and the story that’s mostly told from the unique point-of-view of a “hidden” camera.

We veer away from the quasi-slashers for a segment involving an American (Charles Aidman) and British (Bernard Fox) investigator matching wits. While at dinner, a mysterious note appears (“An unsigned, cryptic note.” “Ah, the best kind.”) It’s the UK vs the US as the “stuffy” Brit challenges the more loose cannon American chap to solve the case. While not terribly unpredictable, Aidman has a wonderful Columbo-esque flavor while Fox (who also passed away in 2016) would have made a crackerjack John Watson. This one was a lot of fun, and I can’t help but think that a crime-centric anthology series in this vein would have done really well in the right hands.

Our last tale involves a rude and anti-social man played by Richard Gates, who we know is a jerk because he turns down the chance to go to a place with “23 DIFFERENT KINDS OF HAMBURGERS” with a co-worker. Once off work, our lead heads to do some shopping. On the way, he rudely brushes off a homeless man and is mean to a store clerk just so we really get the full weight of what a weasel he is. He ends up getting locked in at a store, seemingly for the weekend. Things go from bad to worse when he finds the most clumsy way imaginable to fall down an elevator shaft.

What follows, instead of fun Jennifer Connelly in CAREER OPPORTUNITIES-esque hi-jinks, is a type of water-cum-medieval torture for our lead. Since we kind of hate him, it’s debatable whether or not we’re supposed to pity him or delight in his torture. For me, it’s neither. Its tedium is saved by some weird moments and the unusual setting, however. There’s somewhat of a “higher power” manipulation that’s implied but never explained, which makes it a pretty classic vague allegory for an anthology film. 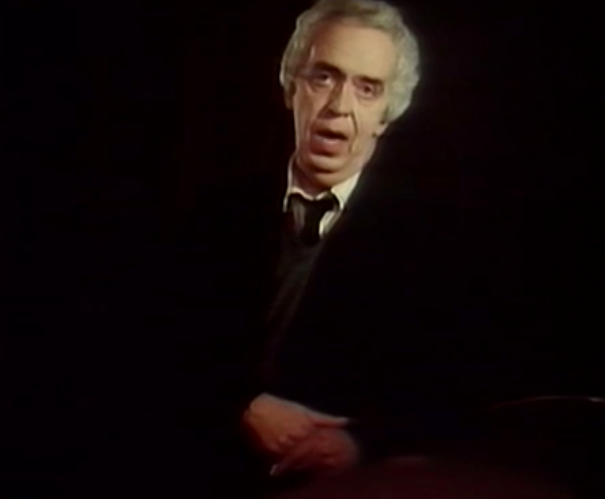 At under 80 minutes, this anthology hustles. Emmy-winning director Sharron Miller, the first woman to win a Directors Guild of America award for a non-documentary film (it was for “The Woman Who Willed a Miracle” alas, and not “Alien Zone”) helmed this unusual mix of mild insanity. Miller has mainly worked in television, and this definitely feels at home on the small screen. Anthology films, especially in the horror genre, are such mixed bags that it’s hard to rate or compare it to others. Like pizza, if you’re in the mood for it, pretty much any quality level will do. That said, it’s better than at least two handfuls of others I’ve seen that had at least twice the budget.

“Everybody’s got something to do, everybody but YOU!”

NIGHT TRAIN TO TERROR is one of those films that are notorious to genre and “bad movie fans” and pretty much unheard of elsewhere. This one’s a bit of a cheat because it wasn’t created to exist as an anthology film: It’s cannibalized from “Scream Your Head Off,” “Cataclysm” and “Death Wish Club”/”Gretta” (also available on Exploitation.TV), three strange tastes from Academy Award-winning writer (!!!) Philip Yordan that taste really odd together.

Our framing device involves God, The Devil, and super enthusiastic lip synching 80’s dancers, who, I’m sorry, I love completely with my entire stupid heart. It’s vaguely reminiscent of 1964’s DR. TERROR’S HOUSE OF HORRORS, also an anthology horror with the tale-tellers on a train, and it was both strange and appropriately disorienting to think of a film starring Christopher Lee, Peter Cushing and Donald Sutherland while watching Richard Moll glower at a naked lady in a distracting wig.

The plots of each segment veer from “What? No.” to “No! What?” Detailing them would be fruitless, but here’s the thing: This is absolutely worth your time. If you love weird movies, good-bad movies, bad-bad movies, if you want a party movie with your Mystery Science Theater 3000 junkie friends (two actors from the Space Mutiny are in this! There’s a connection to “CRY WILDERNESS”!) or if you just want something off the beaten path, NIGHT TRAIN satisfies so many cravings. I’m helpless against strange, messy movies that somehow manage to have a heart, and this one fits that bill and a few others besides.

There are some of the most delightful no-budget terrible effects here, and I’d hate for anyone to miss out on that. That reminds me: Those who are fans of Ray Harryhausen and stop-motion animation in general, who have a good sense of humor, owe it to themselves to see this movie immediately. Factor in that the writer of these tales also wrote JOHNNY GUITAR and DILLINGER, and I’ll make the argument that this is film history at its best.

We’re spoiled for movie choices these days, and I’m grateful for outlets curating releases that appeal to both my curious and lizard brain film tastes.
Stephanie Crawford is a co-host of The Screamcast. You can find more of her work at House of a Reasonable Amount of Horrors.