Welcome to the 9th edition of Horror Down Under, a column series in which I review horror films from my home country of Australia. The purpose of this column will be that it will act as a showcase for various horror related film projects that have been made Australia in hopes that it will get you interested in checking them out for yourself. I’ll be reviewing a wide range of Aussie horror films of various quality from the excellent to the terrible, the all time classics to the latest releases to the completely forgotten, etc. For this 9th edition, I take a look at Aussie horror directors The Spierig Brother’s debut film the 2003 sci-fi zombie comedy UNDEAD… 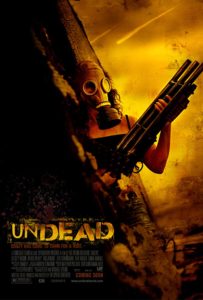 PLOT: After losing her childhood farm to the bank, local beauty queen Rene decides to leave her sleepy hometown and head for the big city. However things change when an avalanche of meteorites start raining down from the sky, turning all those they hit into zombies. In an attempt to escape, Rene stumbles upon a small isolated farm house owned by the town loony, Marion. There she is met with four other desperate survivors. Together they battle their way through a plague of walking dead and discover that there is more transpiring than just an infection. 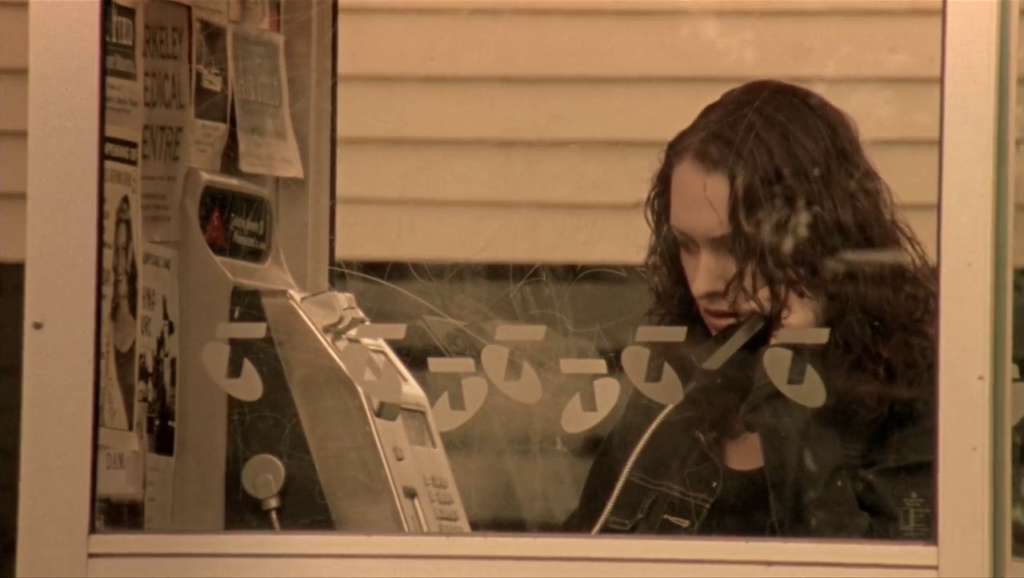 When I think horror sub-genres that have been hugely popular over the pass few years, there’s no doubt that it’s definitely the zombie genre. Just in the 2010s alone, zombies have taken a major turn and become a full-blown cultural phenomenon overnight by due to the success of many hit films, TV shows and video games surrounding them. Seriously you can’t go anywhere these days without zombies popping up in something, no matter what it is. While it’s understandable why most people have been burned out due to how over-saturated zombies has become lately but to anyone who is a huge hardcore fan of them, this has been truly a great time to be alive. Especially after that brief period back during most of the ’90s when the sub-genre was a little *dead* (no pun intended) for a while after its peak in popularity in previous decades. Sure quite a few zombie films were still being made around that time, sadly most of them didn’t strike a chord with audiences. However that all changed when in the early 2000s a whole bunch of zombie films (28 DAYS LATER…, SHAUN OF THE DEAD, the DAWN OF THE DEAD remake, the RESIDENT EVIL film series etc.) all became commercial or critical hits at the cinema. The success of all these films helped kick-start the sub-genre once again and inspired many filmmakers all over the world to set out to make zombie films themselves. Especially in Australia when in 2003 at the high of the zombie film resurgence, two then young filmmaking twin brothers Michael & Peter Spierig unleashed their independently made debut feature UNDEAD. While it wasn’t the first Aussie produced zombie film (that title belongs to the very little seen 1988 film ZOMBIE BRIGADE), it was definitely most high-profile one in Australia at the time of its release. Even though it had a mixed reception from critics and flopped at the box office, UNDEAD quickly developed a cult following and helped open the door for its directors to become major names in Hollywood. 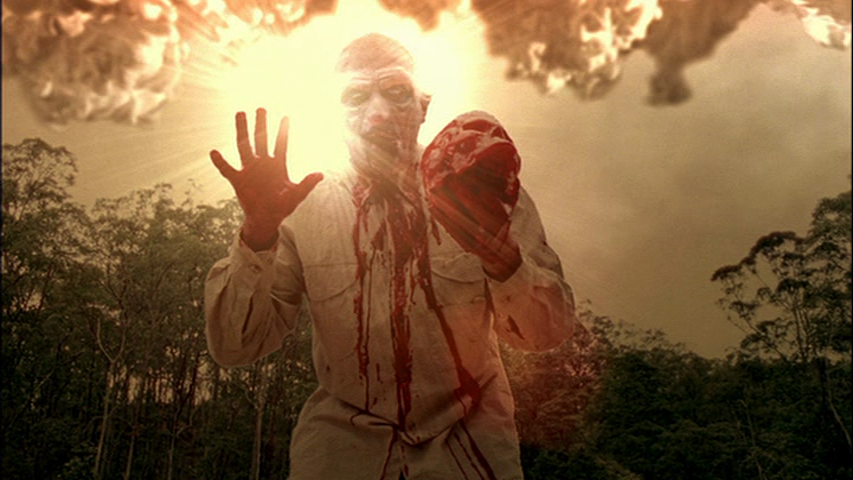 When I first started getting into horror during my teen years, one of the first sub-genres that gravitated towards was the zombie genre. While slasher films were my first love since they were the reason that I became a horror fan, zombies always had my interest ever since I was first exposed to them as a kid through the segment “Dial Z For Zombies” from one of the Halloween episodes of THE SIMPSONS. However it wasn’t until I saw my first two zombie films on cable TV (which were George A. Romero’s original 1968 masterpiece NIGHT OF THE LIVING DEAD and, no joke, RETURN OF THE LIVING DEAD PART II) and started playing the RESIDENT EVIL video games on my PlayStation, that I was officially hooked on them. Once that zombie film resurgence started happening between 2002-2004, I tried to see as many of them as I possibly could in the cinema. While I didn’t get a chance to see The Spierig Brothers film UNDEAD until after it had finished its theatrical run, I immediately rented it out once it became available on DVD at my local video shop. Just like I was with the Aussie slasher film CUT, one of the main reasons why I was excited to see UNDEAD was the fact that it was a homegrown made zombie film and I never seen any Australian filmmakers up to that point try to tackle one before, which it was a really big deal for me as a fan at the time. So what did I think of it when I first saw it? As you would expect, I really enjoyed it a lot. When I decided that UNDEAD be the subject of this edition of the column, I realised I hadn’t seen it since that first viewing 15 years ago. I must admit was tad worried whether it would hold up on a second viewing since I hadn’t seen it in so long. Now having rewatched the film again recently, my feelings on it are still exactly the same. UNDEAD is a really entertaining, funny, gory, crazy and action packed zombie film. 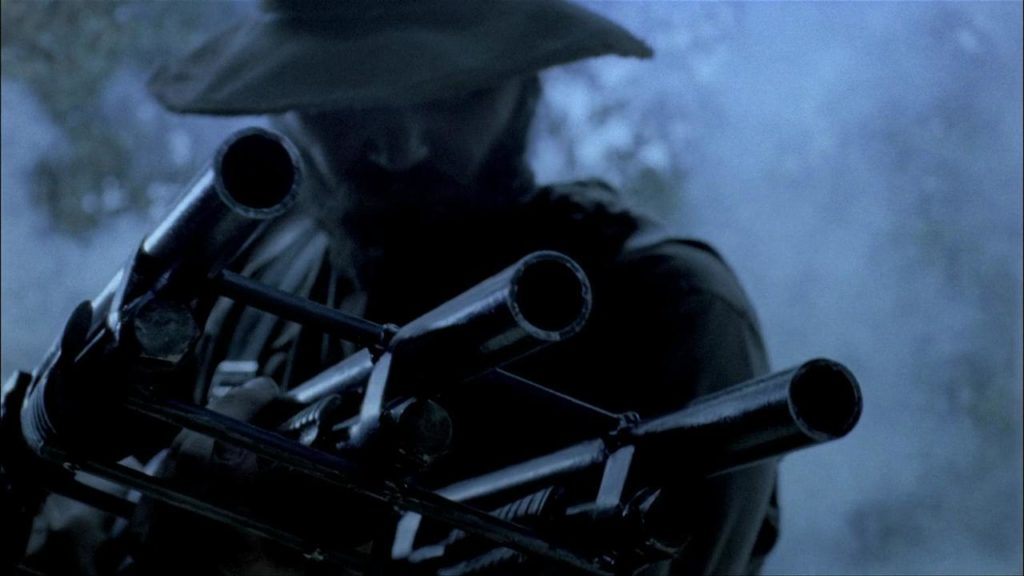 There’s a lot of reasons why I think that UNDEAD works as well as it does but one of them is without the doubt the Spierig Brothers themselves, who I thought did a great job on their debut feature film. The fact they both, along with some help from their family and friends of course, fully financed the film’s $1 million budget themselves is incredibly impressive. As filmmakers the Spierig Brothers brought a lot of energy, enthusiasm, skill and confidence to how they directed this film. It’s very clear from beginning to end that UNDEAD was truly a love letter to all the genres films that the Spierig Brothers grew up on. When you’re watching the film, it’s not hard to see all influences that they both took as inspirations to how they wanted to craft UNDEAD. This film feels like a great mixture of George A. Romero’s LIVING DEAD films, the early splatter horror comedies of Sam Raimi and Peter Jackson, ’80s action films and ’50s sci-fi B-movies (both Cliff Bradley’s memorable score and the credit sequences were definitely a huge homage to them) with a full on Aussie flavour to it to boot. Seriously, I love how just quintessentially Aussie this film is. Most genre films from Australia always try to down play that aspect but not with this one. It fully embraces its Aussieness. Plus I also really dug that despite having zombies in it, they even incorporated aliens into the story in an organic way too (which reminded me of both NIGHT OF THE CREEPS and to an extent PLAN 9 FROM OUTER SPACE). What I really admire most about the Spierig Brothers as filmmakers is that they were personally involved in many creative aspects on the film. Besides directing duties, they also wrote the script, produced, edited and did all CGI effects themselves (which they created entirely on the their home computers). It’s stuff like this that always make me appreciate filmmakers even more since they have a clear vision and passion for the project, which is something the Spierig Brothers definitely had with UNDEAD. 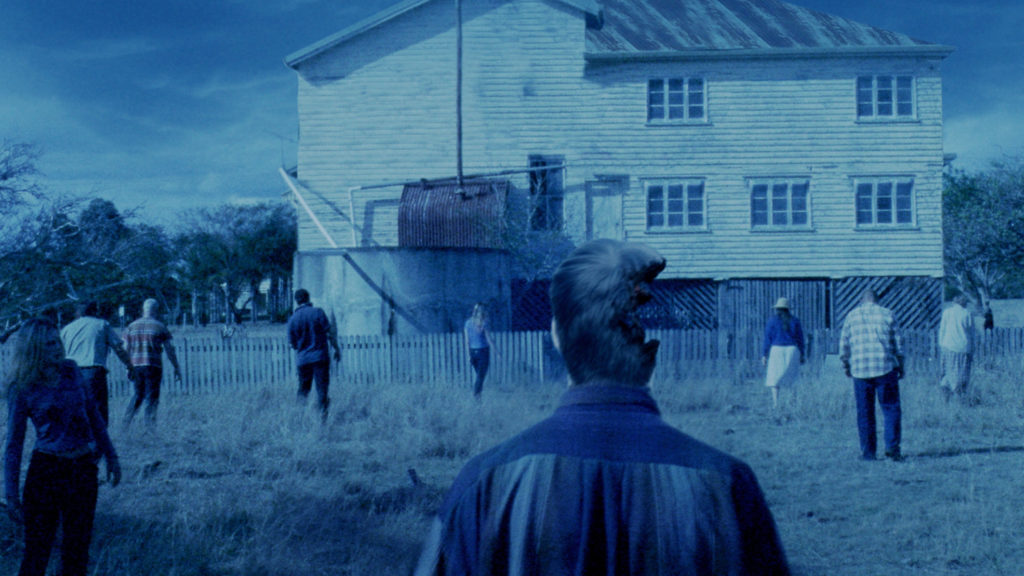 When it comes to the cast that was assembled for this film, I have to admit that I found the actors to be a bit of a mix bag in terms to what they brought to their roles. While a couple of them gave some really solid turns, sadly a few others weren’t able to do that for me. How some members of the cast approached their performances came off as either very shrill or obnoxious for my liking, which I thought made their respective characters really annoying. Still there were some cast members who I thought were really good. Two of which were the film’s main leads Felicity Mason and Mungo McKay. I thought Mason was as great in her role as ‘Rene’. She brought a lot of qualities to her character that made her both relatable and engaging onscreen heroine (her big action set piece was pretty awesome). While some of his line readings did came off a little monotone at times, Mungo McKay was still a compelling presence as the bad arse ‘Marion’. McKay pretty stole every scene that he is in and he did a great job handling the film’s action sequences. Even though I wasn’t that big on the supporting cast, I did enjoy Dirk Hunter’s turn as the cop ‘Harrison’. Yeah, he was very cartoonish and over-the-too, but he delivered some pretty funny one liners though. Also all the practical gore, zombie make up and alien animatronic effects were all great as well. However despite all these many positives, UNDEAD does also contain quite a few aspects that I found to be flawed. While there were some moments that I thought were quite funny, unfortunately most of the humour just fell flat for me. The film’s pacing felt really sluggish at times due to how some scenes just dragged on way too long than they needed to be. If the filmmakers did a bit more trimming here and there, I think the film’s pacing would have been more tighter. Also while I still give the Spierig Brothers a lot of credit for creating all the film’s CGI effects themselves, sadly some of it just looks really cheesy and dated now. Finally I wished that the alien aspect of the story was explored a little bit more.

Overall despite some of the problems that I had with it, UNDEAD is still a really fun and kick arse little gem in the zombie sub-genre that’s an absolute blast from start to finish. It knows exactly type of bat shit crazy film it is and fully embraces it to truly entertaining effect. Plus it marked as a strong debut film for the very talented Spierig Brothers, who after the success of this film would go on to make many high-profile horror and sci-fi films in Hollywood with the dystopian vampire film DAYBREAKERS, the time travelling thriller PREDESTINATION (in my opinion, their best film so far),  the fact-based haunted house film WINCHESTER and the reboot of the SAW franchise JIGSAW. If you a big fan of zombie films as much as I am, UNDEAD is definitely worth checking out for sure. I think that you’ll have a pretty fun time with it. Plus this is a film where one of the bad arse characters carries around a weapon that’s basically three shot guns strapped together and fights zombies as if he’s in a John Woo action film. If that doesn’t get you interested in watching UNDEAD, I don’t know what will.

Note: UNDEAD (2003) is currently available to stream on Vudu here, buy on DVD at DiabolikDVD here or buy/rent on Amazon Prime Video here.