You Shall Not Rot: MISS LESLIE’S DOLLS and WHO KILLED TEDDY BEAR? on Blu-ray! 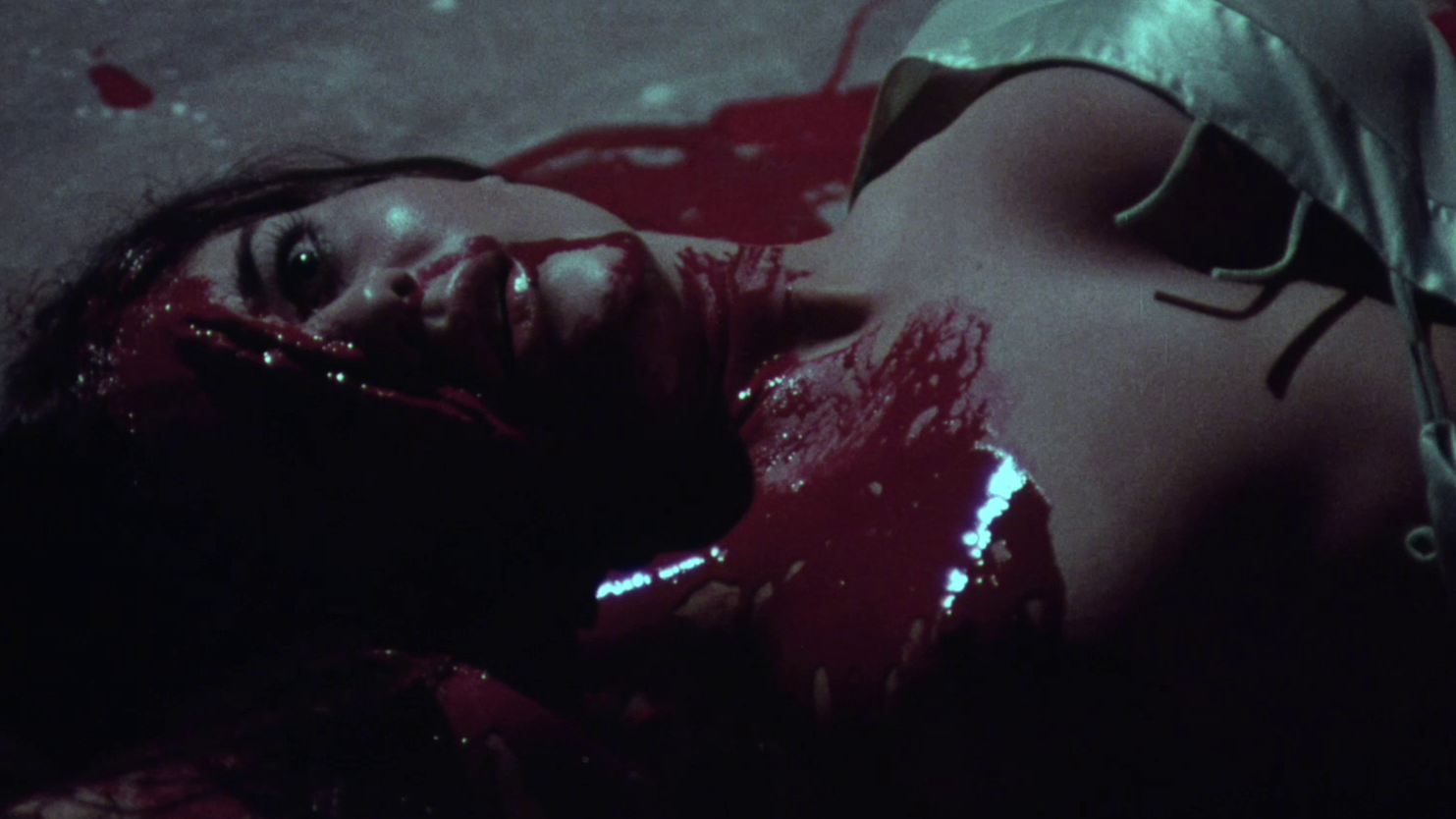 “Such beauty… it could have been mine. Only a corpse now.” 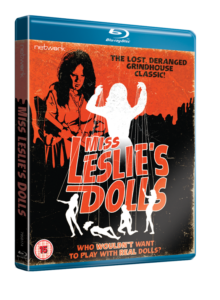 We begin with this classic set-up: A car full of young people (college students and their teacher who looks roughly 6 months older than they are) from Boston end up stranded in a storm. Before you can hum “Over at the Frankenstein Place,” they find their way into a mostly abandoned home… mostly. Even though the furniture is covered, the mistress of the house, Miss Leslie, and her loyal cat still occupy the unwelcoming abode. After Miss Leslie reluctantly lets the gang stay, everyone immediately starts wandering around and has loud, rude conversations about their hostess in the open rooms in her own house. Of course she eavesdrops!

They soon discover a room full of “dolls:” ceremonial mannequins that are clearly living model/actresses trying and failing to stand completely still. What are they really? Why are they there? How did Miss Leslie put together that fabulous cool-toned ceremonial room without it clashing with the red curtain the dolls are hidden behind? 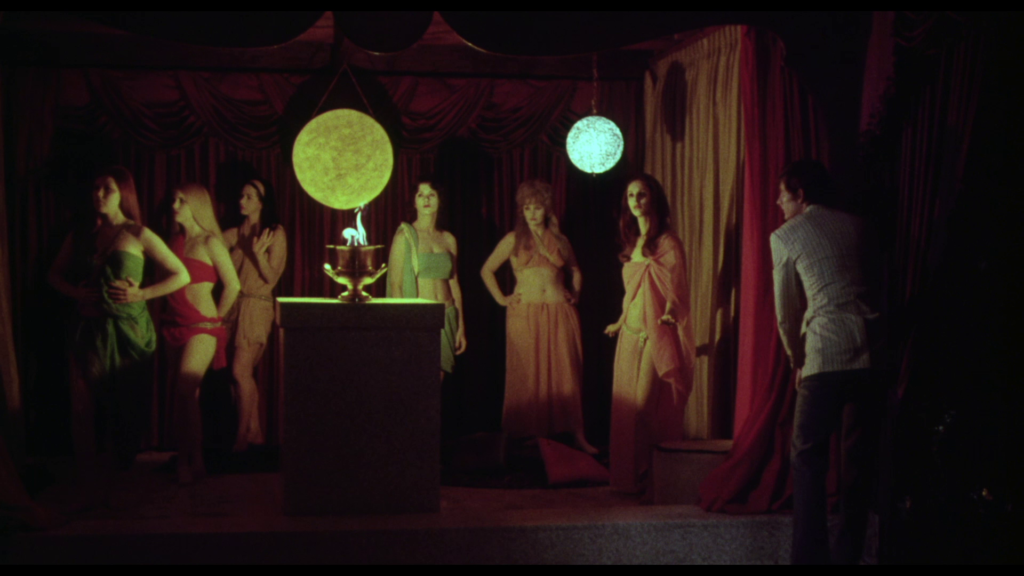 From the outset, the audience is cheerfully made to feel off-kilter. Miss Leslie LaMont is played by Salvador Ugarte, who’s put in the barest of drag makeup, a sensible wig and a shapeless blue dress. His voice is dubbed by a female actress for most of the film, which is as strange as it is oddly adorable. It does end up playing into the plot, which takes turns at being clunky, gothic, goofy, outrageous, and a little heartbreaking. The acting drags: It’s oddly timed, and they’re acting at each other rather than with. Once you get used to it, however, it does aid in the unusual feel of the entire picture. To quote the sole male actor not in drag in the film, “What the hell is this?”

Mixing a dash of TOURIST TRAP with a hint of BLOODLUST while being deeply, deeply different from either of those, MISS LESLIE’S DOLLS will appeal to fans of Herschell Gordon Lewis and scholars of queer cinema. If you want nudity without weirdness attached or a real straight-forward narrative, this might not quite be your flavor. Mild spoiler: This is a film that falls into a subgenre I like to call “Mama’s Skull” along with FRIDAY THE 13th PART 2, PSYCHO, etc., and it’s a category I’ve always been a sucker for.

Through 2018 eyes, this is a fascinating look at how no-budget grindhouse 70s’ movies dealt with non-mainstream gender identity and light lesbian sexuality when they were working in the horror rather than the porno realm. There are no sophisticated or sensitive insights about gender transformation to be found, but that’s not what this movie is, and there are enough audacious flourishes to make it worth your while if you’re even just mildly interested. I ended up enjoying it quite a bit and completely loving it during my second viewing. MISS LESLIE’S DOLLS took a lot of offbeat chances, and it ends up being a bizarrely effective mood piece by the end.

Also: The cat meows in this film are the only ones my cat has ever responded to from a screen, which is notable because I’m noting it right here. 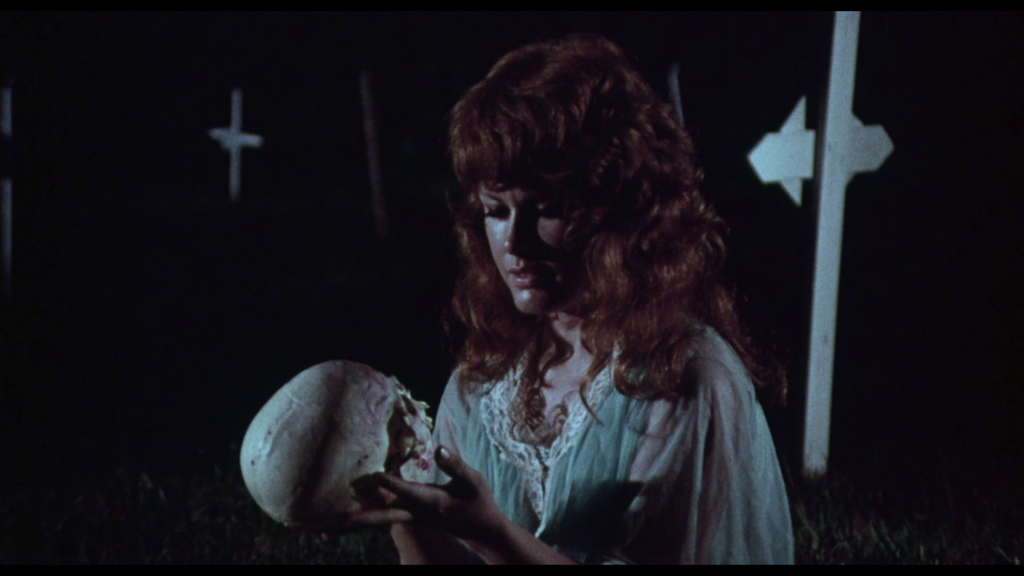 Tech Specs
• 1080p HD
• Aspect ratio: 1.85:1
• Running time: 89 mins
• Certificate: 15
• Optional English subtitles
• Region code: ABC
• Image gallery
• Booklet with the essay “In Search of Miss Leslie” by writer and film academic Laura Mayne
From the distributor: “Miss Leslie’s Dolls has been newly scanned from one of the few surviving prints in its original theatrical aspect ratio of 1.85:1. The restoration carried out involved careful grain management, both automated and manual removal of film dirt and damage, and correction of major instability, warping and density fluctuations.” 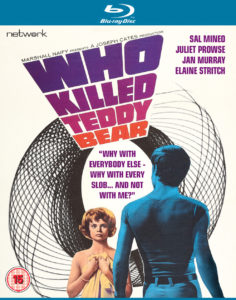 1965’s WHO KILLED TEDDY BEAR? arrives on Blu-ray and DVD on September 17th and hits digital on October 15th, also from Network. WKTD stars Sal Mineo (REBEL WITHOUT A CAUSE, EXODUS) in a tale of a sweet, attractive nightclub worker, Norah (Juliet Prowse), who goes through hell for no reason at all. We open with poor Norah getting an obscene phone call, with only angled shots of the torso and waistband of the underpants of the obscene caller shown. It’s a raw, dirty peek at the perversion of sexuality this film digs into much deeper later on, and the beautiful black and white photography adds a gloss of cold detachment, making it that much more chilling and cruel.
Both Norah and Lawrence (Mineo) work for Ms. Freeman (the legendary Elaine Stritch) in her nightclub, and this movie isn’t shy about sharing drawn out and awkward dance sequences set to one song that only the very luckiest will be able to shake. (That said, the titular theme song from Leslie Uggams is fantastic.) It’s a friendly little joint until one night things get out of hand with Ms. Freeman’s hulking, non-verbal son (Daniel J. Travanti) and a patron. A detective takes a liking to Norah after questioning the gang about the violent incident, and he decides to take on both her and her creepy caller problem. 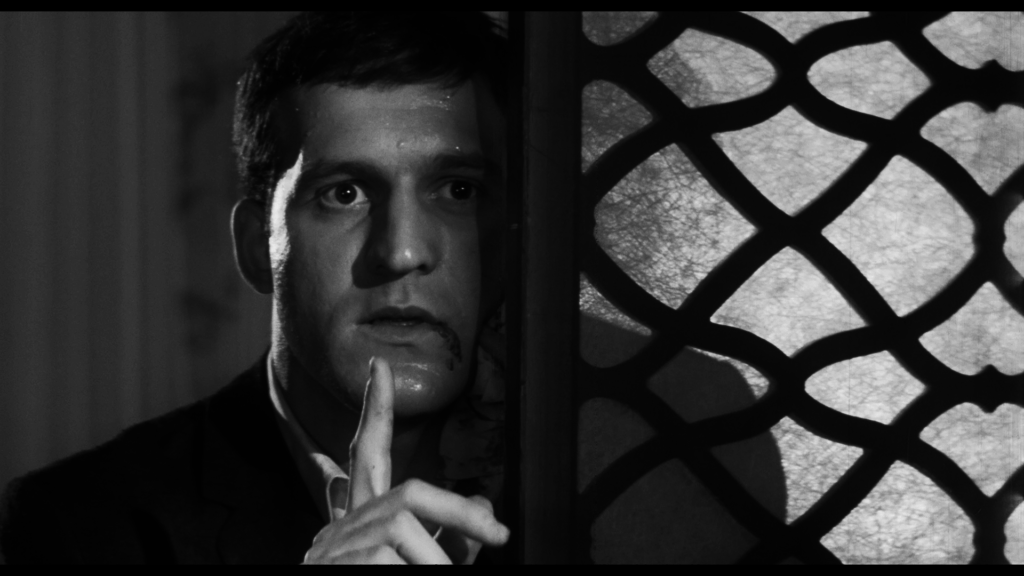 What follows is a standard “who’s the pervert?” plot, thankfully saved from banality thanks to constant dashes of originality, quirkiness and unique character moments that elevate it above most paint-by-numbers light-crime movies of the time. Mineo’s Lawrence reveals layer after layer scene after scene, portraying a sweet waiter kid as ably as he plays his disturbed home life where he takes care of his mentally handicapped sister. Prowse was an experienced dancer, but she was such a naturalistic actress here that, looking over her filmography, I wish there were more films that I could hunt down with her in a substantial role. Stritch, as always, is magnificent and grounded as the put-upon club owner. There’s really not a weak link anywhere in the cast.
I love the sleek-yet-grimy feel of this film. It’s almost the sleazy, mean-but-whip-smart cousin of another movie with an intriguing title: BUNNY LAKE IS MISSING. No one is spared in this movie, and it’s a solid thriller with a truly stunning climax that would make a young Martin Scorsese lean forward in his seat. It looks gorgeous on disc, and it’s ripe for rediscovery. That said, do not miss the anti-LSD short film narrated by Sal Mineo included in the extras, which deserves to be added to any decent “short films to play in the background of parties” mix, which I know we all have. 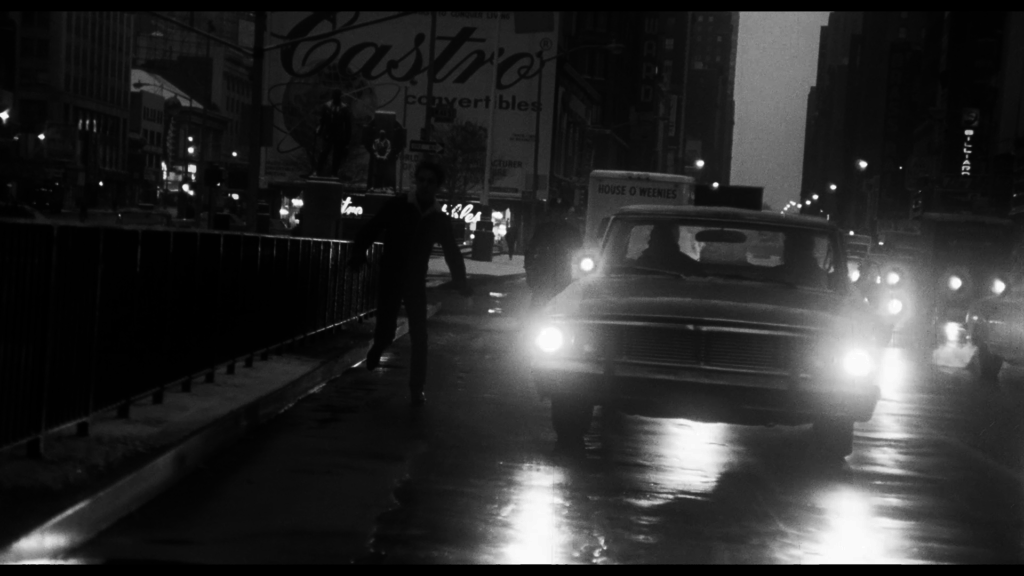