[Fantastic Fest] JOJO RABBIT or, the Kids Are Doing What They Can 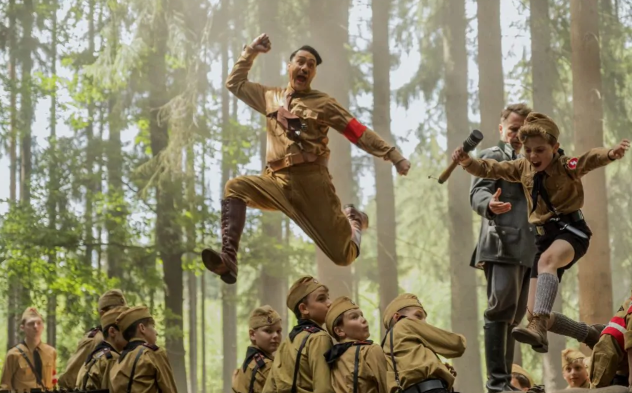 Nothing’s shocking. At least, nothing should be at this point. JOJO RABBIT, the latest film by Taika Waititi based on the book “Caging Skies” by Christine Leunens, centers around the eponymous Jojo, an adorable cherub-type played by Roman Griffin Davis, acting with an emotional maturity at least a decade beyond his years. He’s the smallest in stature of the Hitler Youth in boot camp training, but the biggest when it comes to devotion to his führer. Adolf is Jojo’s devoted invisible friend, and this version of him (played by Waititi) is encouraging, childlike, enthusiastic, and just so gee-whiz about his harebrained schemes to eradicate the Jewish people. Led by the embittered but still whimsically gung-ho Captain Klenzendorf (played with that kind of indie comedy emotional depth that I’m a big sucker for by Sam Rockwell), Jojo gets knocked down again and again only to get picked back up by his chum, a skipping, leaping Hitler only he can see.

It’s the kind of premise that attracts immediate attention, discussion, and even controversy, but what JOJO delivers is something almost entirely pure and wholesome. It’s a story of war, shredded family units, and what it means to be an empathetic human every single goddamn day being during some of the most insanely cruel and incomprehensible times in human history. JOJO RABBIT, natch, is a story through the eyes of a child, and its satire is coaxed more towards healing and teaching rather than arch or jaded observations written primarily to appeal to adults. It’s a risky balancing act, but it works. 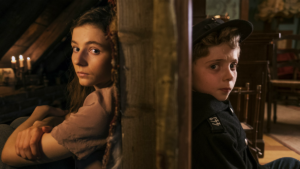 Little Jojo has a preternaturally beautiful, strong, charming Ginger Rogers crossbred with Carole Lombard mother in Rosie, played by Scarlett Johansson. His father is MIA on some kind of mysterious military mission, he has a deceased sister, and his world is about to be upended when a Jewish girl named Elsa (Thomasin McKenzie, and, lucky us, it’s obvious already that she’ll be an actress who will enjoy an enduring career) enters his life and shows the power of guile and sarcasm in the face of fear when it comes to correcting miseducation. Her strength is admirable and true, but the barely restrained terror and uncertainty that veins through her every interaction is one of the key components in grounding the film.

There’s nothing that happens in JOJO RABBIT that could touch the absurdity of what the stupid shithead coward nazis enacted. The difference is that Waititi gathered up that absurdity and used it to dismantle and disrespect a Total Evil and funnel the rest of that energy into celebrating the courage it takes to be labeled as “lesser than” and still rise above almost incalculable bigotry. The heroes and villains are easy for Jojo to label at the start, but as he gains that accelerated experience that war has forced on far too many children over centuries, the center won’t hold. As Jojo’s world opens up and ruptures, the film morphs from a kicky comedy to an almost genre-defying journey that takes us from real tragedy to horrible tension to the kind of bruised physical comedy that’s often the first step to healing in movies.

This film is beautifully shot, wonderfully cast, and funny as hell. It has just as much heart as it does anything else, though, so if you’re okay with something that isn’t an alternate history premise akin to Philip Roth’s “The Plot Against America” or Tarantino’s INGLOURIOUS BASTERDS and can accept a movie that’s genuinely sweet and vulnerable⁠—nearly shameless, really⁠—when it comes to digging into the acres of human emotion there is cultivate during hell on earth, JOJO RABBIT should absolutely be on your to-see list in 2019. If you too appreciate a move towards films that are less easily labeled in favor of telling a unique story by any creative means necessary, this is the kind of art firmly in that lane.