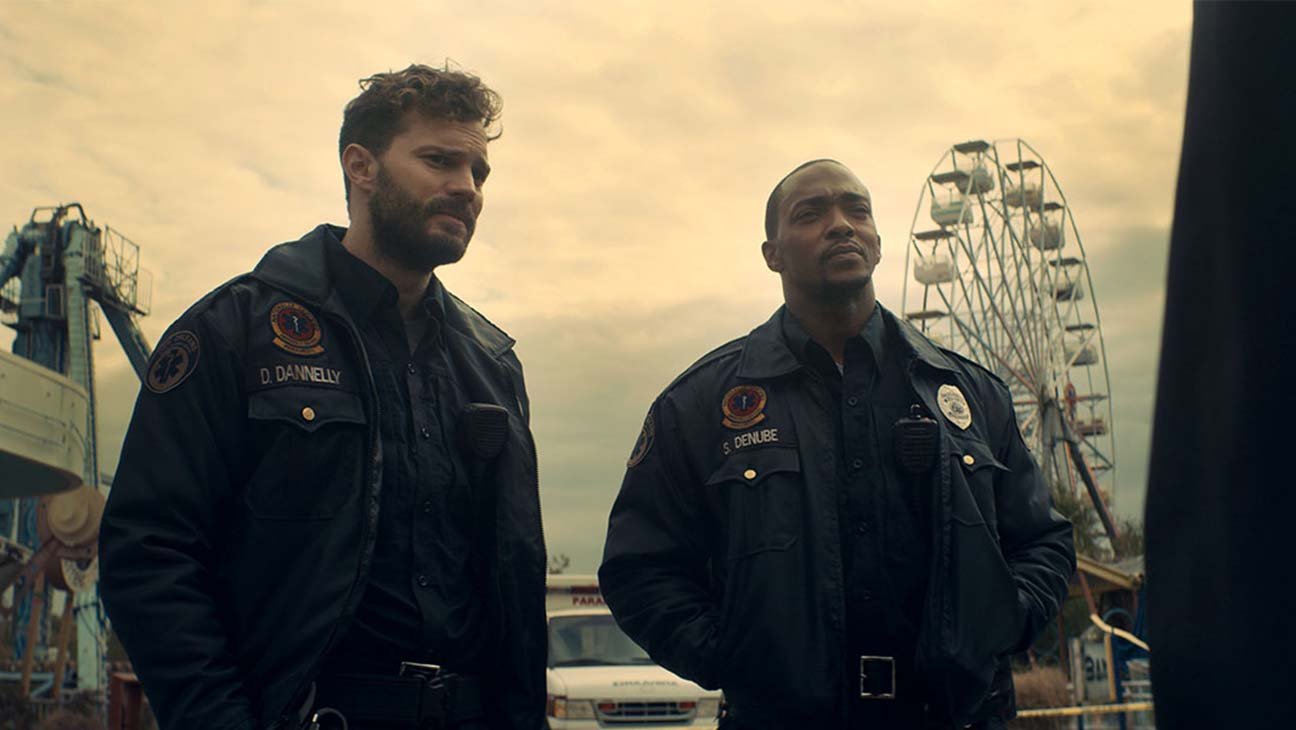 “The buildings never fall down.
They are the teeth of the town.
They crush us up in the grind.
The meat and bone of the mind.”

There are a lot of exciting things about the still-young careers of Justin Benson and Aaron Moorhead, but a big one is how markedly stronger they get as directors (and Benson as a writer) in each film. It’s the kind of obvious, tremendous growth that only the diehard passionate types can achieve this quickly; the skilled types who love what they create as much as they’re a bit emotionally terrorized by it.

For four films now, their talent and work have translated into a storytelling pattern that takes the stance that a life worth living is still worth living hard. So, too, is the way they both bend and fortify a core fistful of themes their films return to time and again. Partnership. Vulnerability. Surrender. Death. Rebirth. SYNCHRONIC is no exception

Based in New Orleans, Steve (Anthony Mackie) and Dennis (Jamie Dornan) are best friends and paramedics who work together day in and day out. Steve is close to Dennis’ family, especially his teenage daughter, Brianna (Ally Ioannides.) Dennis sees Steve’s single life, littered with one-night stands, as exciting and free. For Steve, it’s starting to wear a bit thin, and his family life consists solely of his adorable dog, Hawking.

After Steve gets himself checked out after getting stuck with a needle by a drug user when he’s on the job, he finds out he has a brain tumor that requires immediate treatment. His decision to keep this secret from Dennis while still popping pain pills in front of him starts an erosion between them that takes an even deeper crack when Steve’s life starts crumbling.

While all this is happening, on their shifts Dennis and Steve seem to stumble upon an unending trail of corpses and nearly catatonic people who have all taken a new designer drug, Synchronic. The deaths are often inventive and involve regional or even historical objects that, if not impossible to be where they are, are damn unlikely to be in modern-day New Orleans. When this trail leads to the discovery that Brianna is missing after ingesting Synchronic, Steve takes it upon himself to buy and then destroy the remaining local supply of the now-discontinued drug. When this attracts the attention of the creator of Synchronic, Steve learns that his ailment might be the key to utilizing the pills in a useful way to find Brianna… but the supply is now incredibly limited, it’s pretty much a guessing game, and the drug lasts less than 10 minutes at a time.

Like Moorhead and Benson’s previous films, SYNCHRONIC is, yes, absolutely a genre film that’s comfortable not with hard science language or a reliance on tech or long conversations about why an ancient evil is upending humanity; rather, the intoxicatingly slow creep of otherworldly or unexplained elements weaving their way into well-established relationships and realistic dialogue sets their approach apart.

I do need to stress that this movie contains funny dialogue and charm that fans of their other films have come to appreciate, and the chemistry between Mackie and Dornan feels warm and well-worn. By the time the more traditionally science fiction scenes arrive, the audience tends to be on a sturdy level of empathy to buy whatever they’re selling.

While I’ve never been one for the “elevated ‘insert genre here'” narrative, I fully buy into time and exposure giving each successive filmmaking generation a leg up when it comes to digging deeper into what used to be disregarded as entertainment for either children or people not sophisticated enough to grow out of genre fare. Much like contemporaries Jeremy Saulnier and Macon Blair and their films that blend character meditation with ultra-violence, Benson and Moorhead also grew up in a time period when respectful, starry-eyed horror movie documentaries were easy to find and scholarly works on the sci-fi and horror genres were widely accepted in even academic fields. This isn’t the generation that had to grow up scrounging for media; they had access to nearly everything. When young filmmakers don’t have to expend their energy on subverting or moralizing anything based solely on its label, they can and have used that creative energy to examine, dissect, and refine instead.

In many ways, SYNCHRONIC is both their most grounded and ambitious film. Much of it feels like a noir; the ones that, instead of focusing on a gangster or private eye, would follow around a working stiff and find something extraordinary in their humanity rather than their job title. It’s also steeped in family drama and the stress of maintaining a close adult relationship, which ends up being so engrossing by itself that the first exposure to the science fiction elements made a great impact. It’s easy to recommend a film that realizes optimism and empathy are not only valuable, but they can also be used to raise the stakes to make plot elements even more exciting.

SYNCHRONIC truly is a fun ride, but it’s one that’s holding your hand and whispering you to take in the scenery while you’re on it.