With another Fantastic Fest Film Festival in the bag, my tenth year attending, I’m thrilled to share some of best movies from the fest. For those not familiar, Fantastic Fest is an annual genre film festival held in Austin, TX and this year was the 15th anniversary. The fest is split in two halves with many of the programmed films getting a second screening during the second half. For my recap I will cover each half in its own post highlighting some of the films that deserve your attention. 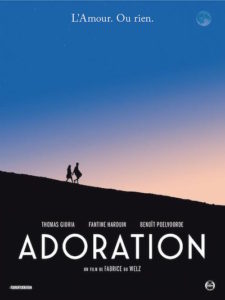 Adoration was my very first selection of the fest and radiates both the melancholy and beauty of young love and the struggle to make it work. Directed by Fabrice Du Welz, who enjoyed previous Fantastic Fest screenings of Alleluia (2014) and Vinyan (2008), Adoration is tale of two teens on the run escaping a harsh reality in hopes of better existence. Shot on Super-16mm, du Welz captures the heartache of a budding relationship that is riddled with psychotic episodes of Gloria, a patient at a mental institution, and Paul, whose infatuation grows with each encounter. Both are confined in their own way as Gloria is restrained and medicated while Paul’s mother, who works at the hospital, forbids him from exercising his imagination and desire to be more. Once they find a moment to escape they’re off on journey into the wild that deepens their love for each other yet also creates a trail of tragedy. The Super-16mm provides a soft focus that is only sharpened when the realization strikes that this adventure towards a life of freedom cannot be maintained. This movie really is about how far one will go for the love of another even if it is misguided and often misunderstand. 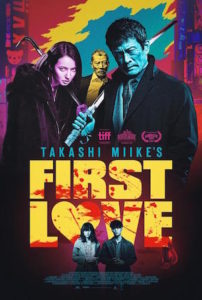 First Love was one of the big opening night films that also featured director Takashi Miike in attendance, his first appearance at Fantastic Fest despite having a few movies premiere at the fest in previous years. His latest is a throwback to earlier films in his extensive oeuvre from the late 1990s and early 2000s. While this is a slicker version of those films, this is still a full-on Takashi Miike crime/romance dark comedy resplendent with cartoonish yakuza violence and often hilarious interactions. At its core is a love story between a boxer with a terminal brain tumor and prostitute with a heart of gold that he meets in passing while she’s being chased by gangsters. This sets up a series of run-ins and double crosses between the mob and the assassins tasked with taking them down. First Love is full of colorful characters and absurd story beats that make for a very entertaining film. Really the perfect Fantastic Fest movie and my overall favorite. Was great to hear Miike during the Q&A as he provided some humorous answers to the typical questions he’s been asked over the years, ad nauseam. 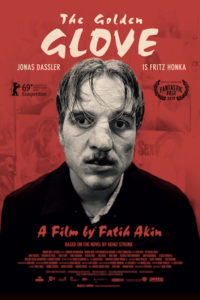 Meticulously crafted true crime tale of a real serial killer that haunted the streets in this dingy corner of Hamburg during the early 1970s. The Golden Glove takes its title from the bar where this disturbed individual would frequent and survey his next victim. Note: this movie is not for the faint of heart or those easily triggered by toxic behavior and brutality towards women. The story recreates the relationships and crimes to precise detail that it’s often difficult to watch it unfold. Actor Jonas Dassler inhabits the role of murderer Fritz Honka to an uncanny level that induces such disgust that you believe everything you see and the manner in which it happens. This is an impressive achievement in filmmaking yet a movie that cannot be recommended for everyone or one that most will want to revisit, including myself. However, if you have the stomach for accurate depictions of this horrifying reign of terror The Golden Glove is one to watch. 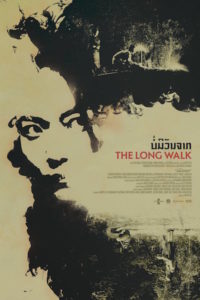 The Long Walk is Mattie Do’s third feature as the first Laotian woman director and horror filmmaker with her film debut Chanthaly (2012), which also premiered at Fantastic Fest (followed by her second film Dearest Sister in 2016). Like her previous two films, she delves into the supernatural and cultural aspects of her home country. The premise takes its time unraveling an eerie science fiction narrative that asks what one would do if they had the power to return to the past. The Long Walk is an emotional gut-punch about fate, the desire to change it, and consequences dealt. Spiritual yet heart-wrenching, a ghost story unlike any other I’ve seen and had me tears by the end. This is a deep and personal film brimming with confidence to tell a complex story that forces the viewer to pay attention. The Long Walk may not work for all viewers but is still a journey worth taking.

Other notable films seen during the first half:

A loose sequel to the Carpenter Brut music video TURBO KILLER by the same filmmakers that features more of the elaborate visuals and pulsating score wrapped around a science fiction action thriller. Imagine a live action HEAVY METAL underground flick that would’ve been shared between tape traders in late 1980s* and you will have Blood Machines.

Damon Packard’s very own Once Upon a Time in Hollywood as a nightmare realized via 16mm and shot-on-video clips. A $500,000 investment that looks like a $500 production of a 2-hour fever dream brought to life by a singular vision. The storyline makes less sense the more you try to follow it yet is fascinating nevertheless. Not for the casual cinephile but absolutely for fans of psychotronic cinema.

A rural Alabama southern fried neo-noir comedy of errors. Directed by Daniel Scheinert (Swiss Army Man), The Death of Dick Long flips redneck stereotypes upside down playing this mystery straight as the audience cringes with each bad decision making the situation worse. Humorous yet heartfelt, this was a festival favorite.

This is an ideal Sunday afternoon documentary. Covers many of the touchstones throughout the history of kung fu cinema from its origins to influences. Even if you’re familiar with most of this material it’s still nice to see all of it compiled here. Also neat to have plenty of historians and filmmakers weighing in on the subject and how this genre has affected them.

Look for my second half recap for more great films from Fantastic Fest 2019. If you haven’t read Stephanie Crawford’s FF2019 coverage you should. Start with Quick Bites: The First Round.

*S/O to my friend Ron who provided the perfect analogy for this flick!