Columbus, OH — Saturday, October 26, day three of Nightmares Film Festival was set to be the longest day of the fest but we were there at 10am bracing ourselves for a diverse schedule of amazing features and short films that would take us to 4am by the end. 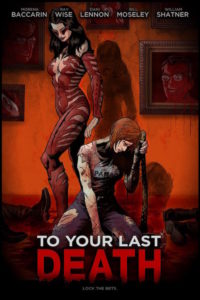 For the early slot, attendees had a choice between two features: To Your Last Death or Making Monsters, both regional premieres. I chose the former to kick off the day but I did hear many positive things about Making Monsters (2019, dir. Justin Harding, Rob Brunner, Canada) so I hope to see that eventually. It did win the award for Best Actor in a Feature.

The animated feature To Your Last Death (2019, dir. Jason Axinn, USA) was a nice way to begin a Saturday. This is very much like a motion comic in how it’s presented (think TV Funhouse with better graphics). The premise is fairly simple: a terminally ill tycoon wants to leave his corporation to his grown children but there’s a catch… he really wants them dead. Oh yeah, all the characters are also unwilling participants in a video game scenario where bets are being placed on their outcome. Fun stuff with some nice voice acting especially by Ray Wise. 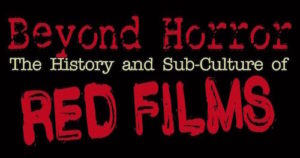 For the noon hour was a documentary that caught my eye before the fest even started. Beyond Horror: The History of Red Films (2019, dir. Jessie Seitz, Marcus Koch, USA) is exactly that and despite being an informative piece on the subject of red films it is still not for the squeamish since plenty of graphic clips are presented. For those unaware of red films or even with passing knowledge this is a very good introduction (if you can stomach some of clips used; there were a few walkouts during this screening to no one’s surprise). Both directors, Jessie Seitz and Marcus Koch, were on hand to field questions afterwards, which was rather illuminating to hear how they approached the material knowing it’s a hot button within the horror film world. I was happy that this documentary won the award for Best Director.

The following feature was She Never Died (2019, dir. Audrey Cummings, Canada), another regional premiere and loose sequel to the brilliant He Never Died (2015). Rather than a man who cannot die, this movie has a woman named Lacey in that role beautifully portrayed by Oluniké Adeliyi. Her nuanced performance really makes this story of underground sex trade and snuff films sizzle. We’re glued to her every move as we see Lacey living in her own isolated world until an unlikely encounter with a young woman caught up with these small time gangsters that results in a bloody action-packed confrontation. Simple yet very entertaining. 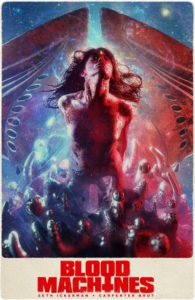 Next was Blood Machines (2019, dir. Savitri Joly-Gonfard, Raphaël Hernandez, France), one I caught at Fantastic Fest and was eager to see again on the big screen because it’s just so bonkers (check out the video for Turbo Killer by the same creators if you haven’t seen it!). Like I’ve previously written here, this is akin to a live action HEAVY METAL flick replete with gorgeous visuals, pulsating score and attractive characters. It was picked up by Shudder so it won’t be long before the masses can feast their eyeballs on this.

The Nightmares Film Festival Awards followed and was easily the most attended event of the entire weekend. This was expected given the number of filmmakers who came to the fest and the large number of awards handed out for features and short films. The awards ceremony was really a wonderful moment at the fest to see the love and support between the fest organizers and those nominated. Some very emotional speeches by the winners highlighted the occasion. Great to witness and testament to power of film festivals like Nightmares to bring people together and showcase their film work.

The Lodge (2019, dir. Severin Fiala, Veronika Franz, UK) was next in the 6pm slot. This was a nice pick-up for this festival and one I was fortunate to see at Cinepocalypse back in June. From the directors of Goodnight Mommy, The Lodge uses similar plotting to tell this somber story of two kids who recently lost their mother stuck in cabin with their father’s new girlfriend, who has a questionable past of her own. Striking cinematography and creepy atmosphere abound in this mystery thriller. Definitely one to see when it gets released in 2020. 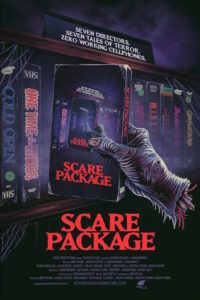 Scare Package (2019, dir. Various, USA) came next providing some welcomed comedic relief. This is a hilarious horror anthology featuring 8 segments subverting a variety of known horror tropes. In fact the concept architect and director Aaron B. Koontz, who was in attendance, stated it was originally called “Tropes” but Scare Package is such a better title and fulfills a trope itself. Overall this is a good times/have-friends-over kind of flick that leans hard into the gooey gore and practical FX. The audience at NFF2019 had a blast with this one. I’m already looking forward to seeing it again.

In the 10pm slot was Antrum: Deadliest Film Ever Made (2018, dir. David Amito, Michael Laicini, Canada), an interesting throwback to a 1970s aesthetic with a unique “lost film” framing device. This is more of a slow burn that follows a couple of children who enact satanic rituals to save their deceased dog but discover something far more nefarious. The “cursed film” approach is an interesting angle that only sort of works but offers something most won’t see elsewhere. Antrum was preceded by the short film Daughter of Dismay projected on 70mm. This was an experience unto itself, which won Best Cinematography for a Short Film. If you are fortunate to see this short you’ll understand why.

Now for the midnight+ slots, appropriately called the “Late Night Mind Fuck” because that’s exactly what these films are, messed up in all the right ways. First up was The Obsessed (2019, dir. Domiziano Cristopharo, Albania), which follows an obsessive fan and the lengths he will endure for his favorite singer. The movie features some gruesome disfigurement sequences along with unintentional humor in how this man copes with his obsession as well as his cats. He has so many cats. Fascinating body horror flick that is an ideal midnighter. 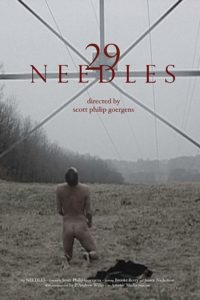 More body horror followed at 2am with 29 Needles (2019, dir. Scott Philip Goergens, USA) that also earned its place in the “Late Night Mind Fuck” programming. The narrative follows a man with unusual sexual desires that become more dangerous as he continues to search for that thing that will ultimately satisfy his growing appetite for pain and pleasure. This is a hyper-explicit movie depicting violence and sex not often seen at most film festivals with a powerful lead performance by Brooke Berry. Bravo to NFF2019 for including it in the schedule. 29 Needles won the coveted Film from Hell Award. This is an unforgettable movie that I wouldn’t recommend to everyone but certainly for those looking for something very different yet deeply disturbing, this is the movie.

Look for my Sunday Day 4 recap soon as well as the final wrap up on the entire fest including all the award winners. Be sure to follow @NightmaresFest on Twitter and Facebook for more updates. Also follow Screamcast and me for more updates!