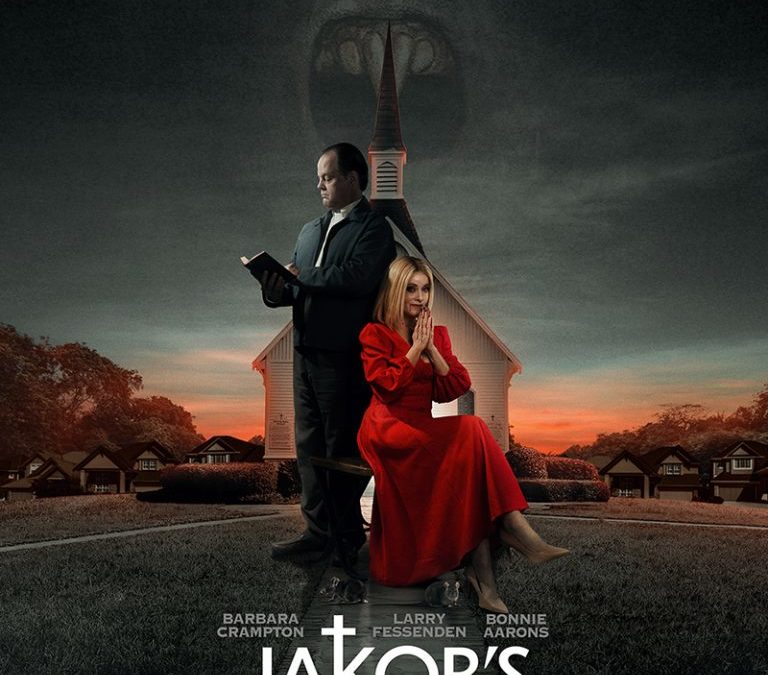 Pastor Jakob Fedder’s wife does have a name. Unfortunately, Anne (Barabara Crampton) suffers from Perfect Wife Syndrome. She’s a supportive force at her husband’s (Larry Fessenden) church, she works out every morning, and she makes sure her man always has a hot meal. The trouble is, that’s about it. She’s underappreciated with no pursuits that belong solely to her, and the strain shows in her tight smiles and tired eyes.

She shifts out of autopilot one evening to have dinner with an old flame. This leads to some smooching in a location any horror fan would shake their head and murmur, “Oh boy, they’re gonna get it in there…” and they certainly do. See, we know a young parishioner, Amelia, (Nyisha Bell) has gone missing after a nighttime attack, so we’re already well aware something is lurking.

The one who got away doesn’t this time, but Anne escapes scathed.

All the signs are there. Sleep and food become redundant; blood becomes awfully irresistible; scarves are needed for a curious neck wound, and Jakob does not like this new wife who doesn’t bother cooking his breakfast. For the first time in their decades together, ol’ Jakob has to put in some work to figure out what’s going on with his wife. After some impressive bloodletting, he figures it out, and their vows are in for quite a test.

The press materials showcasing her aren’t pulling your leg: This is The Barbara Crampton Show. She gets the best cuts of the script, from the sensuality to the bloodbaths to the sight gags. To put it in perspective, Jeffrey Combs would have been given her portions were this the 1980s while Crampton most likely would have Fessenden’s suffering, befuddled supporting role. It’s refreshing, sure, but it’s also vindicating to see a game, experienced actress gleefully pull it all off with energy to spare.

Her giant blue eyes narrowing in triumph as she DIYs herself a stop-n-go stake as her husband stares on is a genuinely funny culmination of her repression, and the movie well knows how important moments like those are.

The tone grows less predictable as the film advances, marrying domestic drama and horror that wants to play in the grue while cracking a few jokes at the same time. Between increasing visits to Anne from what I’m dubbing “Nosferatu from Jerusalem’s Lot” (Bonnie Aarons) and figuring out how to hide bodies, the Fedders’ issues are above any marriage counselor’s pay grade. While the manipulations of tone played a bit unsteadily toward the end of the first act, as the movie started really toying around with the classic vampire premise and the changes in our leads’ marriage, the more fun I had. Throughout, Crampton and Fessenden do a pitch-perfect job at showing the strains and dedication involved in a long marriage and the toll that trying to live by the Good Book can have on a couple.

A bit of a throwback to character-centric suburban creepers like THE LOST BOYS without biting any particular influences too hard, JAKOB’S WIFE ultimately succeeds because it knows exactly which rules to break and has a hell of a time doing just that.