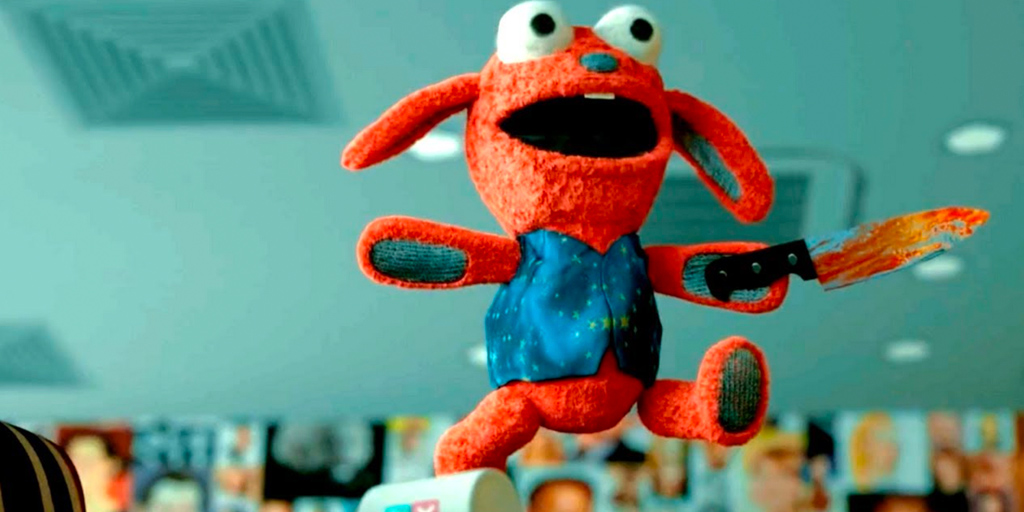 I “attended” my very first Panic Fest via their virtual screenings this year, and I was incredibly impressed by the wide variety of films on offer, both feature-length and short. I’ll be doing a collection of reviews from the fest right here, so be sure to check back! First up, we have a trio of films that look at the lighter side of bloody murder. 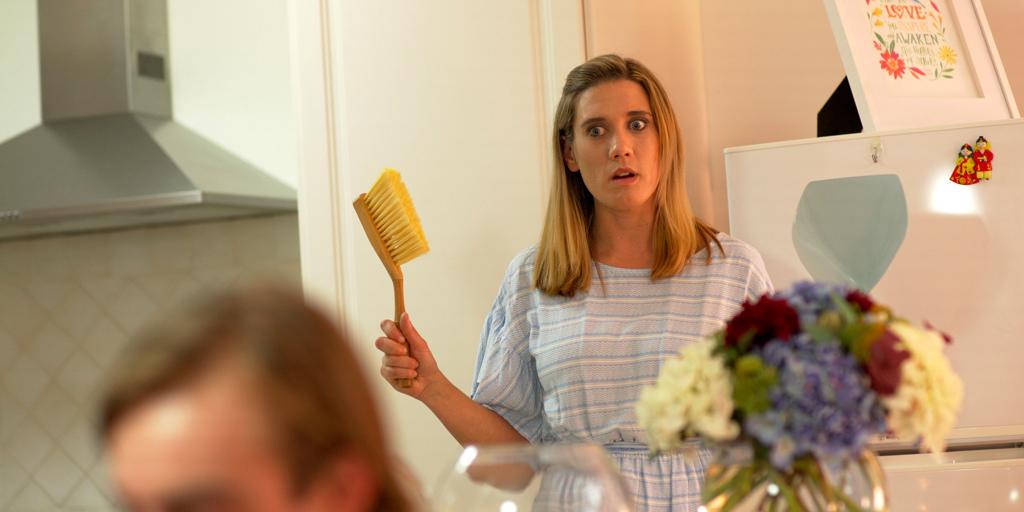 AN IDEAL HOST is one of those fun genre movies that display its influences with pride because it’s confident that it’s doing something fresh with the conceit. Lucky for us, they’re right. The first act walks a balancing act between indie movie awkwardness and a very clever set-up involving a sweet couple that’s a little too preoccupied with appearances. Once things start getting weird, however, we can fully relax as the film isn’t afraid to get goofy and bloody. The slapstick bits are genuinely funny, and the constant shifting relationships between the party guests who find themselves in a classic body snatcher plot are charmingly set up. No time-wasting, prolonged shouting arguments here, bless.

AN IDEAL HOST brought Michael and Peter Spierig’s 2003 genre-bending UNDEAD to my mind more than once, though this one manages to streamline the messiness of comedic-horror-sci-fi plots that seemed inherent until now. If you want economical fun that will still leave you feeling as if you went full ham at a nice buffet, this is one to check out as soon as possible. 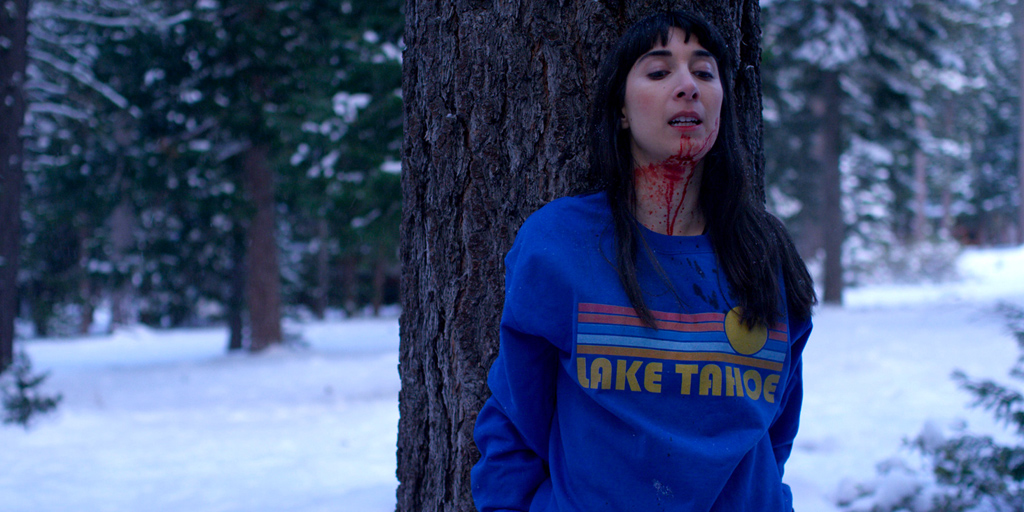 A writer of an (in progress) romantic vampire novel getting to keep an attractive vampire in her garage is a plot that’s about as obvious as it is irresistible. It’s a simple pitch that can veer off in thousands of different directions, and that’s why I was so excited about this film going in. Olivia Romo (Dennice Cisneros) is snuggled into a lovely Lake Tahoe home for Christmas to work on her kissing vampire book, despite the classic nagging her sister is giving her over the phone for not valuing starting a family over her writing career. Her melancholic getaway is interrupted when an injured vampire shows up at her place, a determined hunter hot on his heels.

What follows is, refreshingly, not a predictable romance. Less refreshingly, we get a lot of telling rather than showing. As our unlikely bunkmates slowly get to know one another, we miss out on a lot of revealing conversations just to get some expository world-building instead. Since RED SNOW sports very few locations and has a small budget, hinting at the adventurous world of vampires and those who hunt them only makes us want what we can’t have.

The strength of the story comes from two people coming from incredibly different worlds relating to each other, and we’re given mere moments of it. There’s a scene where Luke critiques Olivia’s novel-in-progress, and it’s a vibrant, clever, and fun exchange. Then what’s built there is largely ignored. A kind of friendship begins to be built between the lady and the vamp, but the dialogue didn’t exactly sell why they’d ultimately find each other so compelling.

Our vampire, Luke (Nico Bellamy), more often than not does a very good job playing a bloodsucker, especially when he’s a dangerous unknown right at the start and later when he’s being charmingly disarming after he’s well fed. Unfortunately, I think Bellamy is maybe about five years too young to portray a creature like Luke. There are scenes where they should have been something deeper or guarded lurking under his gaze as he warns Olivia of the dangers of being a modern-day vampire; instead, we only see a good-looking kid just doing his best.

Most of the movie is fun enough to recommend for a laid-back day of streaming, and Cisneros does an admirable job with some very uneven character motivation, but the tone doesn’t seem to want to commit enough to humor, horror, or subversion for it to get a full-throated recommendation. 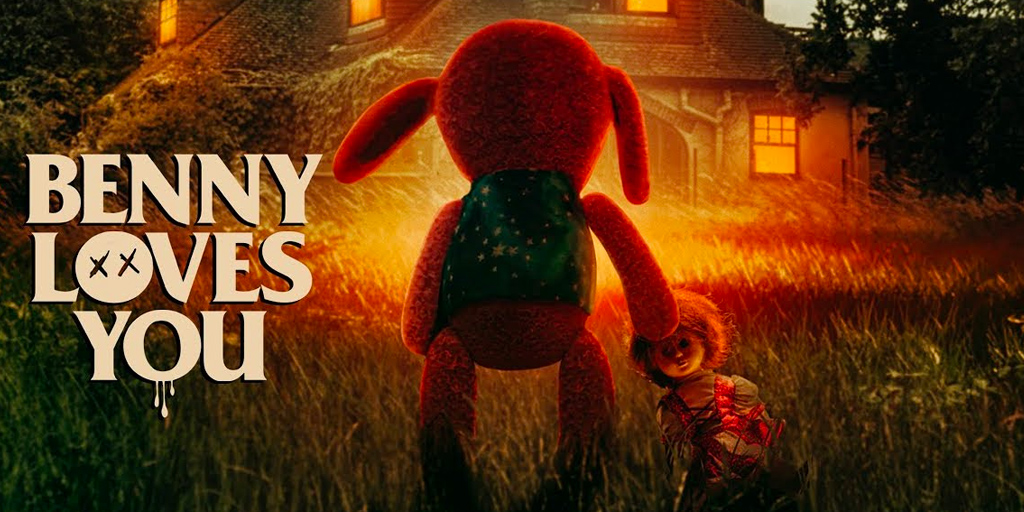 Complicated relationships between humans and toys are nothing new in the horror genre. Something tiny is either cracking wise while stabbing you in the eye or sitting there… just, sitting there… as something terrifying looms just behind you. You want a regular doll in your movie, you better hop genres, pal.

In BENNY LOVES YOU, we’re talking toys that have the unabashed confidence of a Chucky or one of Charles Band’s house of dolls rather than quiet little demon conduits. The world supports it, though: This script is thick with British humour, both of the dry and absurd variety. After our manchild protagonist Jack (Karl Holt) loses his lovely but overindulgent parents on his 35th birthday in an accident that hints at the bloody sense of grim comedy to come, he’s forced to reevaluate his lazy avoidance of life once their responsibilities fall to him. Included in this decision is finally getting rid of his beloved childhood stuffie, Benny. The problem is, Benny loves Jack, and his devotion expresses itself via a body count.

There’s a threadbare tale of the importance of letting go of childish things to finally become a true adult, but I might be suffering from fatigue of having that writ large as The Motivation in so many films. It’s a concept some of us struggle with more than others, sure, but I think I’ve hit my limit of seeing boring white dudes in their 30s come to the same conclusion of surrendering to responsibility after having one last paranormal bruhaha. I’m glad fellow #5635 finally bought responsible furniture and wants to commit to a relationship and his career now, but I can also glean that all from a Facebook update. If we’re going to empower toys with a killer instinct and mobile lil’ limbs, let’s give them more substantial meat to gnaw on.

The wonderfully daffy special effects are enough to earn this a rental alone, however, and while its plot has a lot in common with 2013’s Bad Milo, it’s a much better take on the well-trod subject. With all the issues I have with the film, it’s having a lot of fun, and there are enough ghoulish set pieces and cartoon violence hijinks to make Benny Loves You nearly as fun as its poster. Nearly.