WARPED & FADED BUT NOT FORGOTTEN

WARPED AND FADED: Weird Wednesday and the Birth of The American Genre Film Archive

By Lars Nilsen and friends 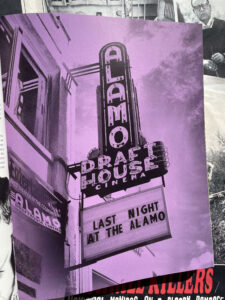 Part oral history, part weird movie compendium, and part film essay collection, WARPED AND FADED: Weird Wednesday and the Birth of The American Genre Film Archive is over 400 colorful pages of sincere appreciation of a more… unpredictable kind of moviegoing experience. Weird Wednesday, a weekly screening event showcasing films from all genres that can safely be called “weird” by aficionados, is now the Alamo Drafthouse’s longest-running and best-known programming series (along with Terror Tuesday.) It started by pure happenstance and a sudden surplus of unusual films, however, beginning as a free event called Something Weird Wednesday.

From first-hand accounts, photos, and newspaper articles, one of Austin’s most interesting and fun periods of unhinged movie celebration is cataloged with a lot of affection along with no shortage of frank clarification. While everyone involved is clearly, hopelessly devoted to film, there’s a refreshing lack of sugarcoating of how things can go wrong with screenings, reel procurement, and even audience response.

The oral history approach was really the only way to approximate the chaotic energy surrounding the wildest and wooliest of the Weird Wednesday years on page. From programmers to audience members, memorable moments from screenings are shared along with behind-the-scenes looks at how everything actually came together. While you can’t replicate actually being there, this trip down memory lane is still a lot of fun to read about if you like plugging into people being really unbridled and passionate about movies most people don’t even know about and, if they did, wouldn’t care anyway. 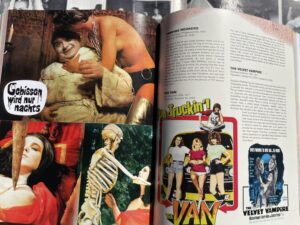 The third and final section is dedicated to “The Weird Wednesday Hall of Fame,” loving essays about luminaries that shine the brightest in the Weird Wednesday galaxy, including Jamaa Fanaka, Laura Gemser, George “Buck” Flower, Eddie Romero, and many more. The tone of most of these often aims at those who have heard of these people or have passing knowledge but could definitely do with learning more, which is a nice middle ground between just a staid 101 overview and potentially alienating deep dives. I enjoyed all of them, but some particular favorites include Kier-La Janisse on Claudia Jennings, Kat Ellinger on Matt Cimber, Stephen Thrower on Andy Milligan, and Zack Carlson’s looks at John Saxon (I’d love to hear that chicken suit story) and Susan Tyrrell, respectively.

Most fascinating, however, is Gary Kent’s personal essay on working with Al Adamson. (Nilsen also has a piece on Kent in the book.) His section is stuffed full of Hollywood lore that only someone who was actually there could conjure so vividly, and it’s worth the price of the book alone.

The book rounds out with an epilogue devoted to the creation and continuing mission of the American Genre Film Archive, which, besides being informational, gives us a nice, optimistic look at the continuance of this kind of work and passion enduring even in the unsteady current cinematic landscape.

While I appreciated the sections of the book that focused solely on the films and filmmakers themselves, I had maybe the most fun learning about how the film libraries themselves were grown. From Ant Thompson’s enormous personal film collection to buying a warehouse worth’s of precious but oft-rotting reels, it was fascinating to see how the Alamo Drafthouse started growing its collection to the point that a program like Weird Wednesday basically had to exist so these movies/trailers/short films/you name it could come alive in front of an audience again. The foundation was born in pre/early-internet film collecting years, and at this point, it’s honestly just kind of grimily romantic to hear about the lengths everyone had to go through to get their hands on actual film. 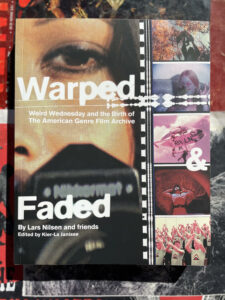 Tactile and aesthetics: While the book itself is softback, the pages are satisfyingly thick, and the spine seems reinforced to handle a lot of flipping around (and, as mentioned before, this is absolutely the kind of book that lends itself to constant random browsing.) It’s a sexy edition bursting with color, memorable movie posters, and a stylish but easy-to-read design and layout from Luke Insect.

Whether you’re a devotee to the filthy halcyon days of exploitation films actually playing at theaters on a weekly basis or new to outlandish/no-budget/off-beat movies thanks to boutique Blu-ray labels cranking them out, or anywhere in-between, this is a gift you can give to yourself or a beloved weirdo that’s as good-looking as it is useful. If you happen to be from Austin and have spent any amount of time in wide-eyed wonder (or bug-eyed confusion) at what you’ve seen projected at an Alamo Drafthouse, you’ll enjoy this on a unique level; plus, this is truly destined to be one of your city’s cornerstone local history film books.

For the rest of us, it’s a fun and informative look at how far a love of both films and movie collecting can take you while being an incredibly solid genre film guide besides. A smart and honest celebration by people who truly love this stuff for other people who truly love this stuff, I found myself mentally stacking movies I wanted to finally see or even revisit as I read and became increasingly inspired and enthused. Any book that encourages the reader to start wanting to create their own little film programming block while also devoting the amount of ink this does to both Susan Tyrrell and Joe Sarno belongs on any honest movie lover’s shelf.