THELMA: Under and Beyond the Skin 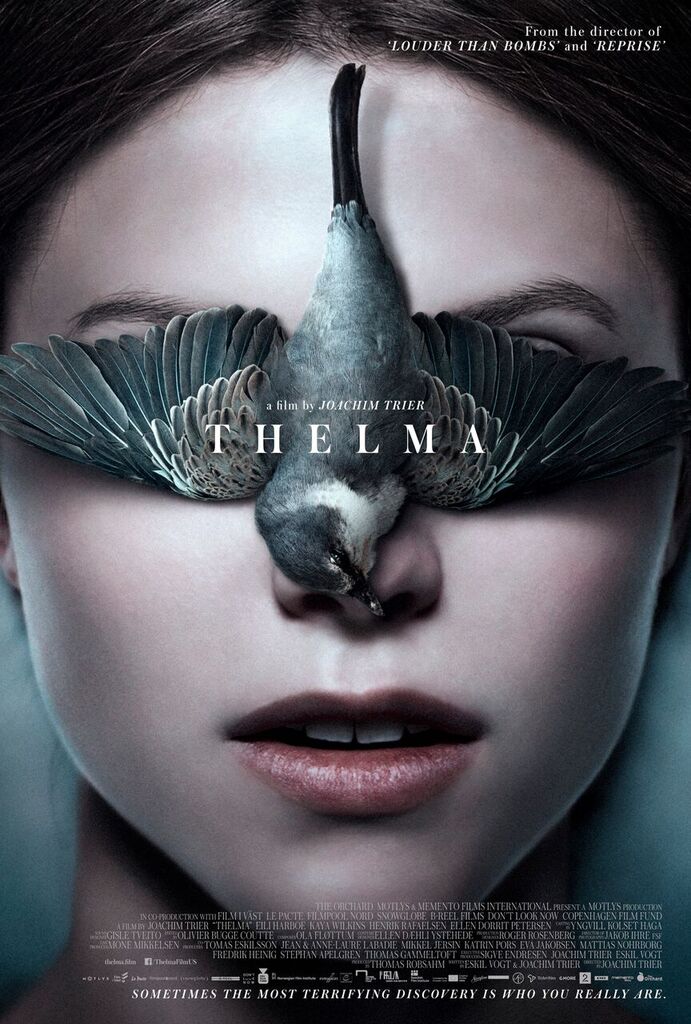 There’s a specific kind of loneliness a child who was raised in a religious family feels when they leave home to enter the “secular” world. Time that used to be marked with prayer, church and bible study is now taken up by classes and social situations that test every single thing they’ve been taught. What was memorized from pages doesn’t bend and move for real situations with living people, and it’s not difficult for anyone, especially a young, introverted girl, to feel completely lost at sea.

This is Thelma (Eili Harboe). She’s started university, and while she’s never been away from home, her parents are only a daily phone call away. She’s tethered to her family while floating in a strange, untested new world where she has no friends and very little common life experience with her fellow students. Miraculously, a beautiful, friendly girl named Anja (Kaya Wilkins) sees something in Thelma. Their relationship begins with Thelma experiencing a seizure in a study hall and Anja following up to make sure she’s ok. I once had a seizure on a second date; if they’re going to happen, the only thing they’re useful for is seeing who cares enough to stick around you.

Anja and Thelma begin a friendship punctuated with laughter and glances that are occasionally, then frequently, held longer than casual glances are normally held. Thelma blossoms. She discovers drinking: how a little is fun but too much tends to ruin things. Late nights can be magical, even if you miss a little bit of studying. What were always sins look seem to resemble growth, love and adventure in the moonlight.

No experience is in a perfect vacuum, however, and when Thelma’s feelings for Anja deepen and war against her religious upbringing, no one is left unscathed. What Thelma can control is quickly dwarfed by family secrets and things she cannot begin to understand. There are endless texts throughout human history that speak of eternity and forces greater than us in every religion, but against the onslaught of pure emotion and betrayal of both the body and mind, those can become a static that reminds us how alone we truly are.

It’s human to crave beauty and simplicity, and it seems to be the job of existence to have that taken away from us at every possible chance. That disappointment and heartbreak start taking their true, sharper form when we start striking out on our own, and it cuts so much deeper for anyone who’s different. It’s a harsh lesson, but it’s beautifully told in this film. Director Joachim Trier and cinematographer Jakob Ihre seem to come from the Ingmar Bergman school of letting the face do the real storytelling. We’re so intimately close to wide-eyed, makeup-free faces telling the story throughout the film that, when the story lets in a small drop of preternatural events or special effects, it’s almost immediately absorbed.

There’s a lot of heartbreak in THELMA, and some of it is truly terrible. There’s loneliness, alienation, familial betrayal, pain and death. It’s all so human, though, that it never feels bleak. It only feels real. Even when the movie presses itself against the thrumming wall of genre and paranormal elements, the naturalistic acting, pacing and even framing keep it grounded. CAT scans, medication and doctors have as much weight and are as beautifully lit as the scenes of landscapes, stage performance and metaphysical events. When we’re shown establishing shots, I felt like I was in a waiting room while a loved one was being examined. Once I was let in, I was completely invested.

As someone who’s never been a big fan of labels, the way THELMA uses whatever happens to be emotionally true rather than predictable genre beats (be it drama, horror, or young romance) makes it stand out against films that, while beautifully made, feel constrained by story arcs. THELMA has freed herself from that so it can pick and choose them at random when it felt true, and it felt like a gift.

THELMA mirrors life: It’s beautiful, mysterious, painful and confusing. It’s so authentically done that it feels like a gorgeous and dark accessed memory. There’s nothing pretentious or false here, and I recommend that those who love all genres of film equally (or nearly equally) to see this as soon as they can.

THELMA was chosen for Norway’s entry for the Best Foreign Language Film at the 90th Academy Awards. It opens on November 10 in New York and November 24 in L.A.