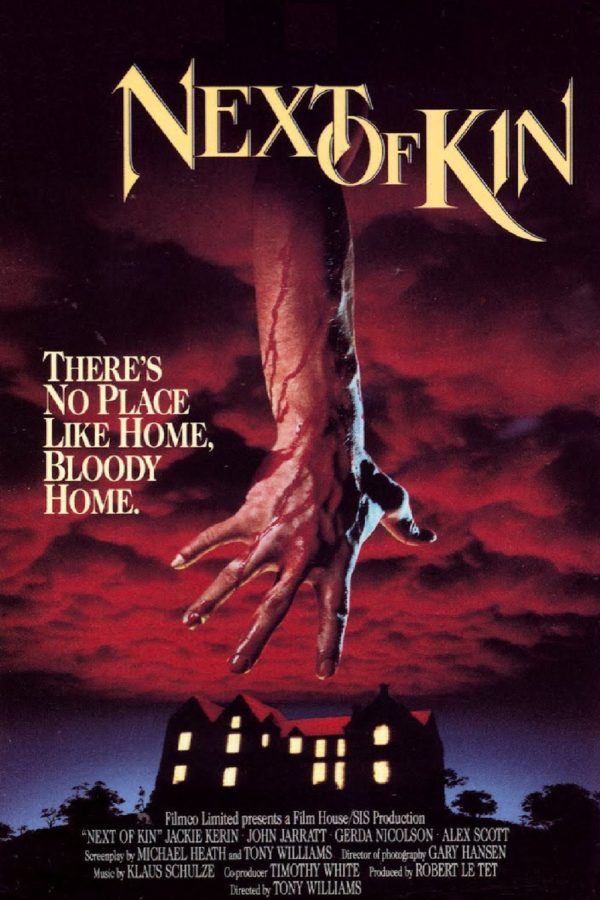 Welcome to the 10th edition of Horror Down Under, a column series in which I review horror films from my home country of Australia. The purpose of this column will be that it will act as a showcase for various horror related film projects that have been made Australia in hopes that it will get you interested in checking them out for yourself. I’ll be reviewing a wide range of Aussie horror films of various quality from the excellent to the terrible, the all time classics to the latest releases to the completely forgotten, etc. For this 10th edition, I take a look at the obscure but incredibly haunting and unique 1982 horror film NEXT OF KIN… 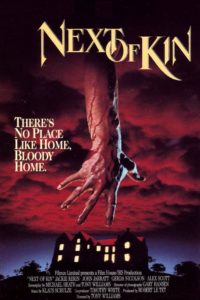 PLOT: Twenty-four-year-old Linda Stevens (Jacki Kerin) inherits Montclare, a country mansion which was turned into a retirement home by her late mother and her sister, Aunt Rita. Strange events described in her mother’s diaries – lights and taps turning on by themselves, voices in the night – seem to be recurring. Linda suspects long-serving Montclare housekeeper Connie (Gerda Nicolson) and local physician Dr Barton (Alex Scott) of hiding details of Montclare’s finances and the death of Aunt Rita. Turning to boyfriend Barney (John Jarratt) for help, Linda attempts to unlock the mysteries of Montclare. 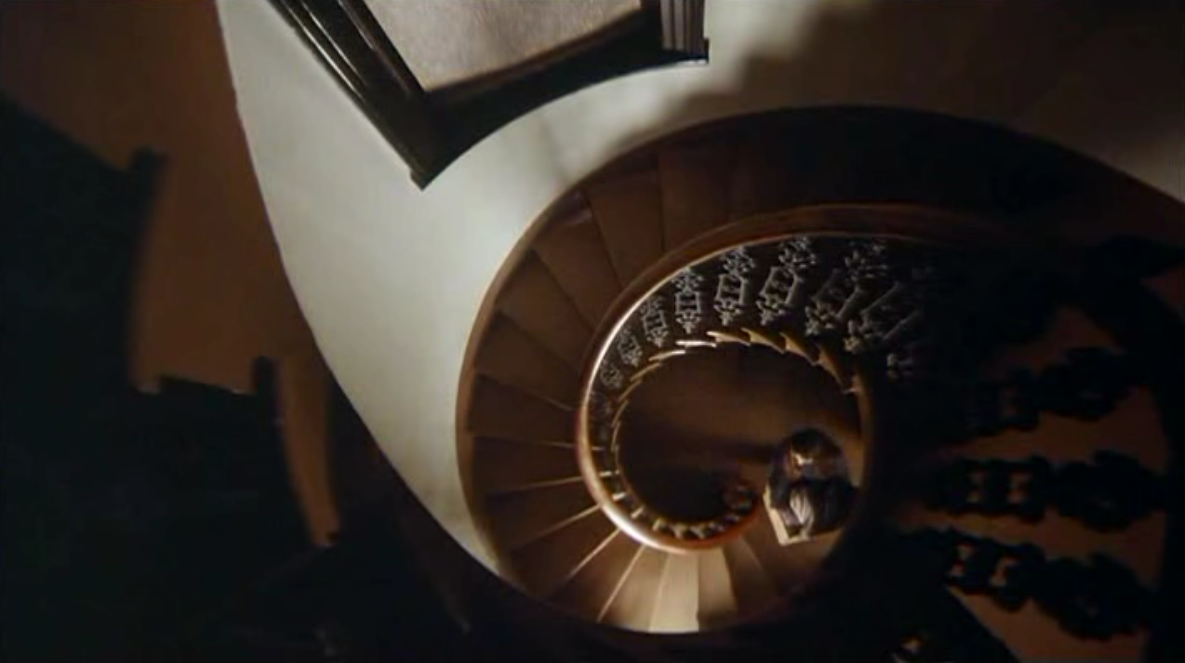 It’s always funny to me how many truly great films always seem to slip by without anyone noticing. One week a film can be released in cinemas and then just like that the following week, it disappears without a trace and forgotten about until it is eventually comes out on the home video market. Especially here in Australia when it comes to our locally produced films, where it always seems to happen a lot. One particular film that falls into this category is the obscure 1982 horror film NEXT OF KIN. Just like the other previous Australian horror films that I’ve covered previously for this column, NEXT OF KIN received a mixed reception from critics and was a commercial failure at the Aussie box office upon its release back in 1982 (although it did manage to receive a nomination for Best Film Editing at the Australian Film Institute Awards later that year). Luckily the film did get better overseas where that same year at the Stiges Film Festival (one of the world’s most prestigious genre film festivals), it beat out classic horror films like Sam Raimi’s THE EVIL DEAD to win the award for Best Director. Over the pass 36 years since its release, NEXT OF KIN has become a highly praised cult favourite among both fans of obscure horror and Ozploitation cinema. One of the film’s biggest admirers is director Quentin Tarantino who not only proclaimed it as one of his three all time favourite Australian films alongside both MAD MAX and ROADGAMES, he also said that NEXT OF KIN reminded him a lot of Stanley Kubrick’s horror masterpiece THE SHINING in both its tone and feel (if that isn’t a massive ringing endorsement, I don’t know what is). Now that film is widely available via both a recent region free DVD and Blu-Ray through Umbrella Entertainment, horror fans all over the world can finally discover this terrifying underappreciated gem of Australian horror for themselves. 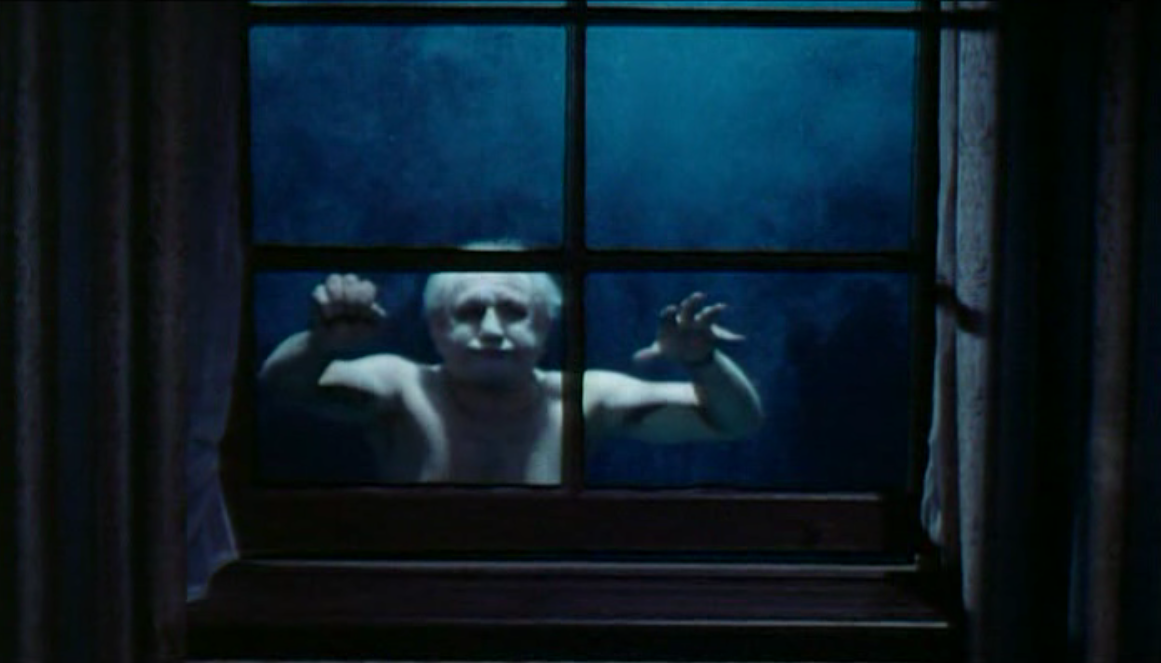 It really astonishes me that when compared to other famous horror films that Australia has produced over the decades like THE BABADOOK, WOLF CREEK, RAZORBACK, ROADGAMES and PATRICK, New Zealand born director Tony Williams’ film NEXT OF KIN isn’t uttered in the same breath as much as those highly regarded classics have been. Granted it’s a little hard to be when, unless you’re a hardcore horror/Ozploitation fan, only a small number of people have probably heard of your existence. Which is a shame really because I honestly think that NEXT OF KIN is just great as those classics. I can remember NEXT OF KIN first appearing on my radar when back during the mid-’00s when an Aussie film magazine I was reading called FILMINK wrote a little blurb on it in an article that focused on Australian horror films. However it wasn’t until seeing it being discussed, along with hearing Tarantino’s high endorsement of it, in the documentary NOT QUITE HOLLYWOOD: THE WILD UNTOLD STORY OF OZPLOITATION in 2008 (which I’m starting to think has become my own personal Bible on Aussie horror for me, since I’ve mentioned it quite a few times in past editions of this column), that I knew I had to see it. It wasn’t until 2013 when I was able to finally tracked down a copy of the film (I had to watch it on YouTube since its first initial DVD release had been out-of-print for a number of years) and decided to add it to my list of horror films to watch as part of my ’31 Days Of Horror’ that October. I didn’t know what to expect from it the first time I watched it but afterwards, I extremely impressed by what I saw and it became one of my favourite horror films I saw that Halloween season. Now having recently rewatched NEXT OF KIN again in its brand new 4K remastered form on Blu-Ray, I can honestly say that without any certainty whatsoever this film to me definitely belongs up there as being one of the greatest Australian horror films ever made. Yep, I really mean it. 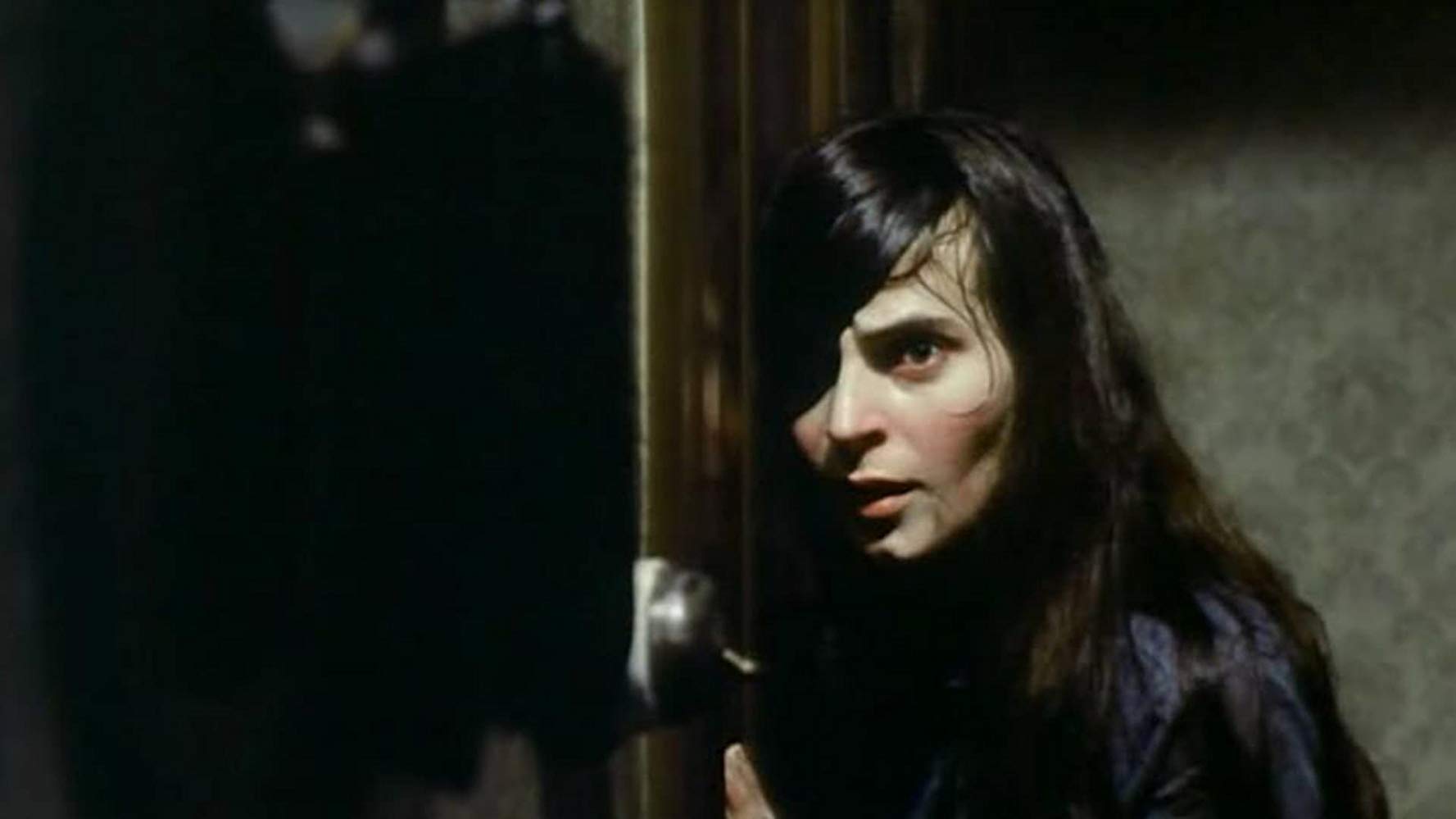 While I was watching NEXT OF KIN for the second time, I was really fascinated just how completely unique of a horror film that it is. Tarantino was definitely right for sure that NEXT OF KIN’s tone and feel is quite similar to THE SHINING. Even though both films are completely different in so many ways, they both managed to have an unnervingly eerie dreamlike atmosphere that’s full of creepiness and dread. I honestly can’t think of any another Aussie horror film that is like NEXT OF KIN at all. Not just in tone but also in plot, which is an interesting mix of haunted house, psychological horror, slasher and even giallo. In fact this film has a lot more in common with the slow build atmospheric horror films from Europe than it does with any Australian ones, which was very deliberate choice of approach by co-writer/director Tony Williams. You see early in NEXT OF KIN’s development stage it was actually going to be a violent tongue-in-cheek TEXAS CHAINSAW MASSACRE-esque horror film called STICKY ENDS but due the rise of slasher movement in the early ’80s, Williams along with his entire crew decided take the film in a different direction and turn it into a more European style horror film. If you ask me this new direction to what NEXT OF KIN ended up being in its final form is what makes it such an overall one of a kind Australian horror film in every way. Williams (who made this as his follow-up to his 1978 debut film to a romantic drama called SOLO) did such a fantastic and sublime job with his direction on NEXT OF KIN. He crafted a beautifully subtle but captivating, surreal, unpredictable and legitimately scary film that knows how to keep you completely absorbed from beginning to end. How he stages some of the film’s most terrifying and creepy sequences are superbly well done on every level (especially that entire final 15 minutes). In fact a lot of his directorial choices reminded me a lot of both John Carpenter and Dario Argento’s filmmaking styles. It’s a shame that after making NEXT OF KIN, Williams never directed another film again until recently in the pass five years when he made a few documentaries in his native New Zealand. Still I would love to see Williams return more narrative based films because based on this film alone, he definitely has a lot of talent as a filmmaker. 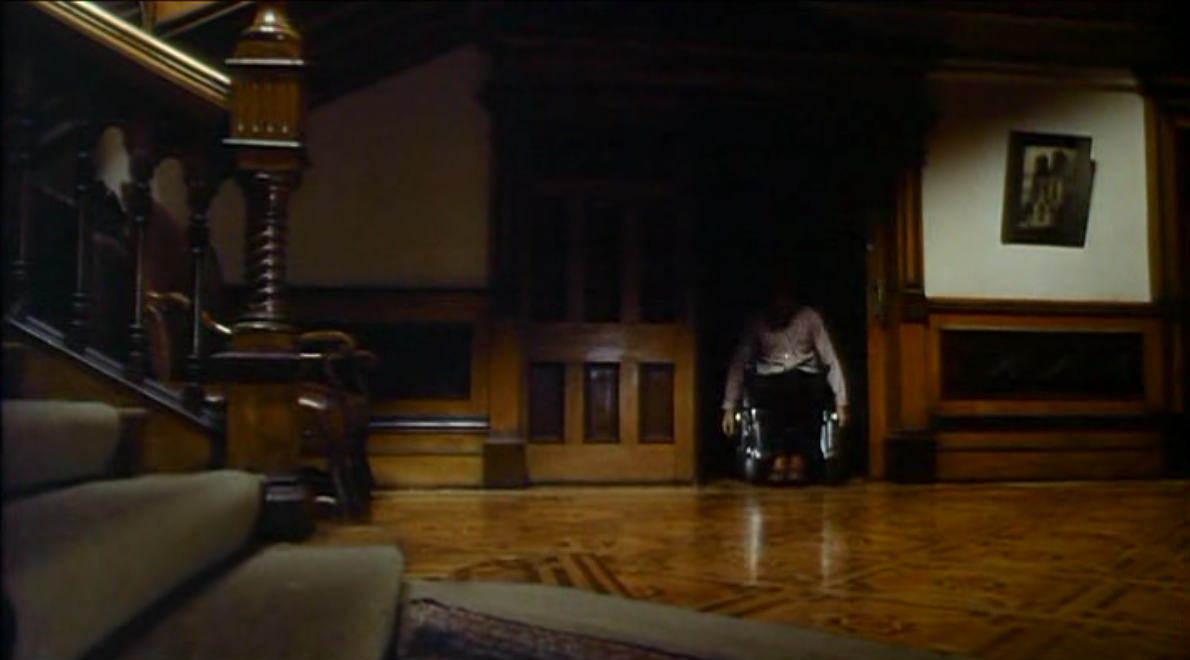 When it comes to performances from the film’s cast, I thought that everyone did a really good job in their roles but there’s no doubt that the film belongs to its lead star Jackie Kerin. I found her performance of “Linda” to be both compelling and relatable. From start to finish I was engaged by character’s journey and how investigating the mysterious events surrounding Montclare started to affect her psychological state. Throughout the film “Linda” isn’t sure whether everything she is experiencing is real or not, and Kerin was able to convey that extremely well with her performance. Also her co-star John Jarratt (who’s starting to become a recurring figure in this column, since this is third Aussie horror film that I’ve written about that he’s starred in) brings his trademark likeable every man quality once again to his role of “Linda’s” boyfriend “Barney” and the rest of the supporting cast (Alex Scott, Gerda Nicolson, Charles McCallum etc.) all strong as well. On the technical front the script by director Tony Williams and co-writer Michael Heath (who after this film would go on to write horror films in New Zealand like THE SCARECROW, DEATH WARMED UP and MY GRANDPA IS A VAMPIRE) is extremely well written, the production design is top-notch, Gary Hansen’s cinematography is visually stunning and atmospheric (interestingly enough, NEXT OF KIN was the first ever Aussie film to use the Steadicam technique), the score by one-time Tangerine Dream member Klause Schultz is brilliantly haunting. Now were there any aspects of NEXT OF KIN that I thought were flawed? To be honest I didn’t have any problems with it all. Not to say that the film is 100% perfect or anything, any issues that I had with it are pretty minor. The only main one that I can think of off the top of my head is that there are some aspects of the story that I did wish that the filmmakers delved into a bit more, which I felt were a little too ambiguous. That being said even though I can definitely see a lot of people having problems with the film’s final 20 minutes. Even though I really loved this part of the film myself, I will admit that it does feel like it comes out from a completely different film when compared to what we saw in the previous 70 minutes. It’ll definitely divide a lot of people but personally I really dug it. Plus it leads up to film’s utterly memorable final shot too. 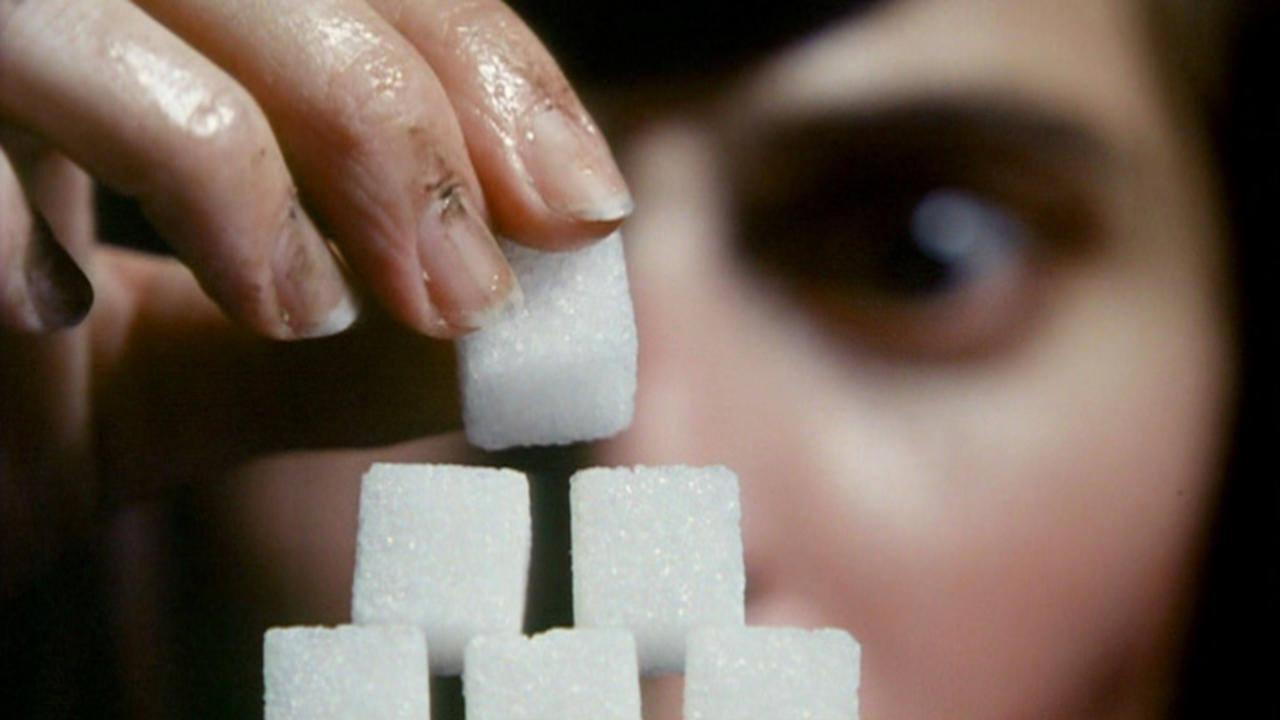 Overall there’s no question that NEXT OF KIN is an absolutely fantastic and completely underrated Australian horror film that I personally think is one of the best that my home country has ever produced. Just everything about this film just works on so many levels. It’s original, riveting, surprising, unsettling and really scary. Even though I had seen the film before, there are scenes that happened during it that still manage to give me chills the second time around. I fact I would put it alongside both WOLF CREEK and THE BABADOOK as one of the scariest Aussie horror films that I’ve ever seen. This is a film that definitely deserves to be rediscovered by all horror fans all over the world and now that it’s readily available on home media via DVD/BluRay, hopefully it finally will for sure. If you are one of those people out there who hasn’t seen this gem, I highly recommend you all to seek out. Believe me, you won’t regret it.

Note: NEXT OF KIN (1982) is currently available to purchase through Umbrella Entertainment on DVD here and BluRay here or through Amazon on both DVD and BluRay here.